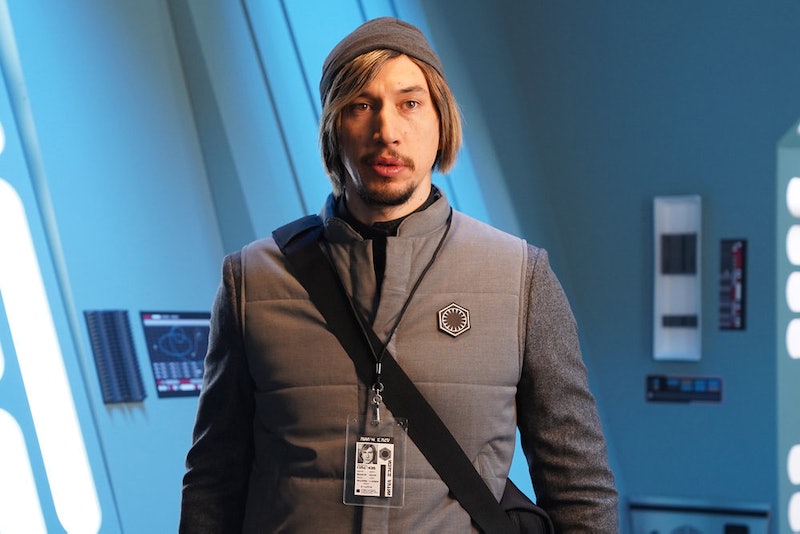 In the Jan. 25 episode, Kylo appears on the Undercover Boss special, Where Are They Now? so he can see what his employees are like when his imposing presence isn't around. Just like the last time Kylo went undercover, the Star Wars villain smiles weakly and gives the camera a thumbs up before donning his foolproof disguise. Things go...predictably bad. Not only does Kylo decide to make "OK, boomer" his catchphrase, but he sorta kinda kills a few people.

A lot has changed for Kylo Ren since Driver last hosted SNL. Both The Last Jedi and The Rise of Skywalker premiered after the actor's hosting debut, and Kylo has graduated to Supreme Leader of the First Order. But with his promotion, however, have come certain challenges. "I'll say it: I haven't been the best boss lately," Kylo tells the camera. "I've been a little distracted by some personal drama."

Indeed, it's obvious he's still hung up on Rey, bringing up the Jedi to his fellow interns. "When Kylo Ren offers Rey his hand for the second time, do you think she'll take it?" "Randy" asks his fellow coworkers.

"Who cares?" a character played by Melissa Villaseñor says.

"I DO!" Kylo replies, much too aggressively.

And while he's still got a serious anger problem, Randy is at least kind of, sort of doing his job. As @mthoughtsrablog wrote on Twitter, "Matt walked so Randy could f*cking run."

Indeed, Randy follows orders and even gets one of his coworkers cleared to become a TIE fighter pilot after she tells him that only Kylo Ren can get her approved. Unfortunately, he undos all of that goodwill by stabbing the woman with his lightsaber when she says something positive about Luke Skywalker.

Also just like last time, it's immediately obvious to everyone that Randy the Intern is actually Kylo in disguise. Perhaps it's the fact that he murders one of the admirals after he makes fun of "Randy." Or maybe the new employee just looks a lot like the broody Kylo. Not that his side-swept bangs and grey skullcap aren't super authentic. In fact, the look has already generated fan art, so props to the SNL costume department.

One fan pointed out that Kylo's Randy disguise looks a lot like Kristoff from Frozen. Randy the Intern is certainly a strong look, but even a cool catchphrase and messenger bag can't mask his heart of stone.

While some people might be worth melting for, Kylo Ren is certainly not one of them.