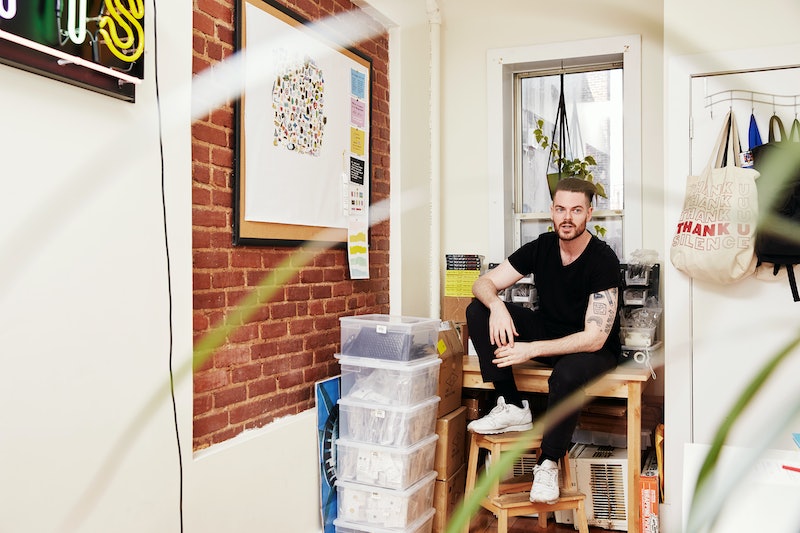 Just like the world at large, the Internet can be a rough place. Trolls are everywhere, as are upsetting headlines. Every time you scroll through your feed, there seems to be another fabulous person blissfully eating an acai bowl on a sea cliff making you think, "Why is everyone else having a better life than me?" And then, if you're lucky, you'll run into a gentle reminder to cheer the eff up! That's the work of Adam J. Kurtz, or, as you might know him from the internet, @ADAMJK.

His hand-written notes are funny, simple, honest, and sometimes a little dark, such as, "You are alone and that is OK," and "You tried," or, "At least you're cool on the internet." Kurtz's work is simple and accessible, with a childlike quality of equal bluntness and wonder. Wearing all the feels on his sleeve, he's making the Internet sensitive again.

"My work often starts as sticky notes to myself," Kurtz told me on the phone. We chatted for over an hour about life, work, podcasts, and being the Internet's artsy, inspiration guru. The Canadian-born graphic designer started sharing his personal work on tumblr about a decade ago, which is where his viral style crystallized. "I realized if I wanted to keep making personal things that were sort of documents of my life, I could expand it into something visual that can be shared. Converting it into my actual handwriting lets me say really blunt stuff."

What began as little affirmations to himself has blossomed into a business, a community, and a brand. In addition to photographing, producing, and promoting his work online, Kurtz's pieces have been turned into t-shirts and pins. Every year, he puts out a cheeky daily planner themed by his offbeat and slightly dark brand of self-care. He has 2 books on shelves (1 Page At A Time and Pick Me Up), and one on the way. Things Are What You Make Of Them: Life Advice For Creatives is out this September.

And though he's been his own boss for two years, turning his meditation ritual into his livelihood as well as a ~brand~ was hardly the plan. "Side-hustle is almost a misnomer because I never expected to make money," Kurtz says. It was just something that worked. And sure, "personal brand," is thrown around and poked fun at a lot these days. But Kurt'z spin on a "personal brand" is being a person whose brand is just to be honest, bittersweet, and uncontrived, and ultimately human.

“If people don’t see you in your business, they’re much more comfortable being sh*tty," he tells me. "But I don’t get a lot of hate, because it would feel like you’re coming to my house and yelling at me, and people don’t want to do that."

Rather than coming into his metaphorical house and yelling, Adam's found people showing up with pizza and wine and making themselves at home. Adam has formed a positive and supportive community of likeminded people on social media. On Instagram, he has the pleasure of watching his fans connect with one another. "People make friends in my comments," he says. "It's kind of my dream that one day, two people will meet in the comments and get married." He goes to Facebook to ask for business advice, or just ask how something makes people feel.

As it happens, Kurtz's Things Are What You Make Of Them: Life Advice For Creatives — was born on social media in a sense. “This book took place over the course of two years of writing individual bits of info and sharing them," says Kurtz. "It was the A/B testing of social media feedback that got me to the point of making this book.”

With mini-lists entitled "how to stop comparing yourself to other creatives" and "find fresh inspiration," Kurtz's third book addresses your creative anxieties with a series of meta lists. You might be trying to start your novel, write a new song, finish a painting, or even just think up a big idea at work. Other than rainbows and butterflies and all the birth metaphors, the reality is that creating something makes you vulnerable. Breaking all the feelings dredged up in that process into little pieces of sensitive yet blunt advice, Kurtz suggests little ways to move past things — one step at a time. Always reminding you, for however empowering or terrifying this might be, it's all up to you.

"Things are what you make of them' has been my mantra for five years," he says. "This is my guide for getting through life as a person like me, so we went really literal and called it that. ... It’s up to you to build something up, and if it's scary, you can break it down. You’ve just gotta take things in steps."

And great news — the response so far is great! The critics love it. Celebrity fans love it. So how does Adam feel? "It sort of brings its own level of anxiety of it being very emotional and personal, so if people don’t like it, it means they hate me," he says. "Even though the response has been positive, this book feels like my horcrux. My heart and soul, literally, in such a blunt way, went into it."

And in spite of the restlessness that comes with releasing a big project to the world, the timing somehow feels like kismet. He's embarking on a promotional tour, releasing this book, running a business, and planning a wedding to his fiancé Mitchell (thinking up a wedding hashtag has unexpectedly been the hardest part so far).

"I'm entering a period where a lot's going on in my life, but I’m so excited to have this book by me, cause I’m always gonna need it!" He tells me. "It's also just so like me to create a problem, and within the problem is the solution."

Sometimes, taking your own advice is just that simple.

This article is brought to you by Samsung Chromebook.