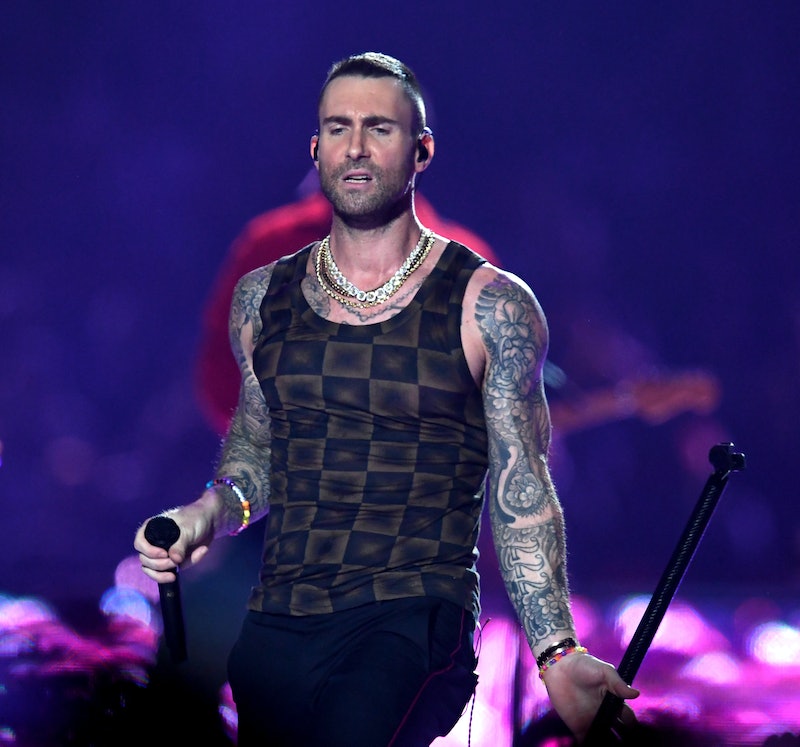 Maroon 5's rockin' medley of tunes was not the talk of band's Super Bowl LIII Halftime performance. Nope. Rather, Twitter is astute and fashion-conscious AF. Therefore, the Twitterverse noticed that Adam Levine's Super Bowl tank top looked a lot like (really bad) home decor. No, really. Twitter also opined that the tank looked like a lot of other things — among them hotel carpet, Louis Vuitton's signature pattern, a chess board, and much more.

Levine wore a geometric, brown checked tank top while performing and it showed off his copious tattoos. However, it looked like pillows and curtains that many listeners own. Twitter has receipts. ALL. OF. THE. RECEIPTS.

Fans were posting photos of their pillows next to Levine on their TV sets and beyond.

Clearly, a lot of people like the pattern for their couches and to punch up their home decor. But how did it translate as a t-shirt? Well, the Internet was not in love with the shirt version.

As The Huffington Post reported, a similar pillow is currently available at Walmart for less than $15 — if you want to do the reverse and have Levine's shirt to inspire your couch accoutrements just like pillows and home decor indirectly inspired his shirt.

Here's Adam Levine's much-maligned tank. It's worth noting that there was indeed a Super Bowl prop bet about what color shirt Levine would wear during the performance.

BTW, did anyone else notice his layers of necklaces, where he mixed materials?

In case you want to shop.

Levine eventually went shirtless during the performance. That move sparked several other conversations — all of which are important and worth having since Janet Jackson was dragged after her performance and baring a nipple over a decade ago. It reminded us of the double standard.

That said, here's what social media had to say about Levine's ugly tank.

It's also a futon.

What a popular home decor print. Maybe Levine was onto something when he wore a shirt that looked like so many people's couch cushions and pillows.

It also reminded the Twitterverse of software.

This was a pretty common reaction.

It surely had Twitter's post-performance attention.

Is it really THAT bad?

It would seem so.

It does have the similar aesthetic...

What an on point observation.

To get this sort of reaction, perhaps?

Maroon 5 have plenty of hits. Levine's tank obviously wasn't one of them.

Levine started out the halftime set with a black jacket and layers. It was several minutes into the performance before he whipped 'em off and revealed his furniture-inspired tank top.

Vegas oddsmakers who created the shirt prop bet likely didn't anticipate Levine wearing a pillow pattern top. Levine and his team likely didn't anticipate the Twitter response to it, either. Levine has yet to comment on the Twitter conversation about his fashion choice as of press time. Perhaps his business advisors are already in talks for an Adam Levine home furnishing line to take advantage of the buzz?