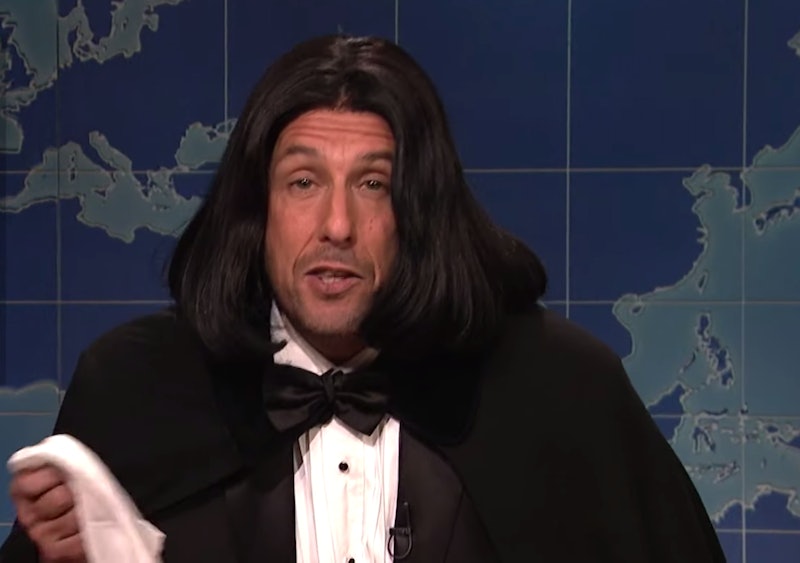 A veteran comedian made his return to Saturday Night Live this weekend, offering his own humorous take on the week's news cycle, as well as President Trump in general. During a return to his role as "Opera Man," Adam Sandler mocked Trump during SNL's recurring "Weekend Update" sketch.

Sandler skewered a slew of people as part of his bit, during which he forced rhyme while performing in a mock "opera voice." When he landed on Trump, he alluded to the children's nursery rhyme Humpty Dumpty and suggested that the president let people close to him take the blame for controversies in and surrounding his presidential administration.

""Trumpa, dumpa, / Trumpa, dumpa," Sandler sang while images of the president appeared in a slideshow behind him. "I make-a the wall/ I playa the golf/ and they take-a the fall."

When he landed on the last line, images of Trump's various associates appeared behind Sandler, including Trump's former lawyer Michael Cohen, Paul Manafort, Jeff Sessions, and Kirstjen Nielsen. But the comedian didn't just go after Republicans. In a second verse about the president, Sandler sings "they afraid to impeach" next to an image of congressional Democrats. And finally, he lands on the president's relationship with Russian president Vladimir Putin.

"I get to make-a the wall," Sandler continued, "And Putin makes me his beetch."

Sandler didn't just roast the president, however. He also offered his take on the 2020 Democratic presidential nominees, some of whom he suggested weren't that exciting. Listening a number of current contenders, Sandler detailed why he thought each person was or wasn't likely to make it to the White House next year.

First, Sandler listed some of the women candidates who are receiving large amounts of attention, including Elizabeth Warren, Kamala Harris, Amy Klobuchar, and Kirsten Gillibrand. He implied that the fact that they were women was their main challenge on the campaign trail. "They have slim chance-o," Sandler sang. "They no wear pants-o."

Moving on to male candidates Beto O'Rourke, Corey Booker, and Pete Buttigieg, Sandler sang that they'd have to "wait-o" to have a chance to become president. He explained exactly why in the next line of the verse. Raising his voice, Sandler sang, "Here we go again." Behind him, a photo of Bernie Sanders and Joe Biden appeared.

Aside from the White House proper, Sandler also reserved space to find humor in Attorney General William Barr opting not to testify before the House Judiciary Committee last week.

"Where did Barr go?" Sandler sang while shaking his hands. "He did not show. Check every single Wendy's."

Sandler riffed on a number of other current happenings, like Game of Thrones and the Kentucky Derby, but ultimately landed on a tribute to his Opera Man role. "So very long since I've been around-ah/ 24 years and 24 pounds-a," Sandler sang. "So glad to be back/ now I get a snack. Opera Man, bye-bye." As was the case when he originally played the part, the sketch ended with roses being tossed into his lap.