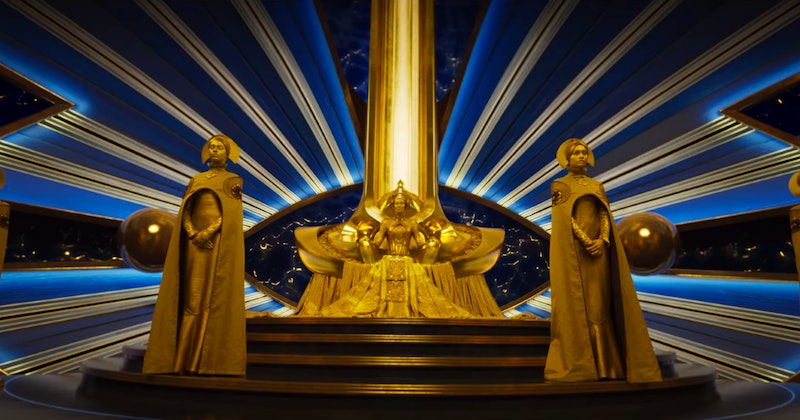 Adam Warlock is coming to the Marvel Cinematic Universe. The mysterious new character was teased — spoiler alert — in the most informative Guardians of the Galaxy Vol. 2 post-credits scene, and it's clear that he's going to play a major part in the future Guardians movie(s). Adam Warlock in the Marvel comics is a completely unpredictable threat to the galaxy, and it looks like he's not going to change in the MCU.

In GotG 2, Adam is introduced as Sovereign High Priestess Ayesha's creation. A brand new being, genetically designed to be the perfect foe to the Guardians, Adam is still cooking in his golden cocoon in the scene, meaning we haven't gotten a clear shot of him yet. And we probably won't get a good look at the MCU's version of Adam until Guardians of the Galaxy Vol. 3 (GotG director James Gunn has stated on the record that Adam will not be in Infinity War).

Luckily, Adam has been consistently present in the Marvel comics since his debut in a 1967 installment of Fantastic Four, and there's a lot of knowledge to be gathered from his frequent appearances. Most notably, however, the most important thing we can learn about Adam from the comics is that he is one of the most dangerous and powerful characters in the entire galaxy.

In the comics, Adam was created by the Enclave, a group of scientists who wanted to create the perfect human. Then known only as "Him," Adam emerged from his Enclave cocoon as a super powerful being, unable to be controlled by the scientists. He made a few appearances in Fantastic Four and Thor as a villain type, but he didn't really get his own story until 1972's Marvel Premiere series. In that series, Him officially became Adam Warlock, adapting a human name that reflected both his human form and his extraordinary powers. Still, Adam didn't really get his turn in the spotlight until The Power of Warlock, his solo title, was released later in the '70s. In this iteration, Adam was established as a crucial part of Marvel's cosmic universe. He's done a lot over the years, but here are the most important things that could inform his character in the MCU.

He's Crossed Paths With The Guardians Before

Adam Warlock is known for having an extreme God complex — pretty unsurprising given he's been genetically altered to be the perfect specimen. His history in the comics is full of instances in which Adam's ego gets in the way of his morals. He's power hungry, and that can lead to some vindictive decision making. It's also important to note that when he first emerged from his cocoon in the comics, he had the temperament of an angry teenager, meaning he was quick to anger and not very logical. If Adam in the movies takes after this version of Adam, then the Guardians are definitely in trouble.

Part of what makes Adam Warlock such an intimidating foe is that he's basically immortal. He has been known to use his massive powers (he can control energy, fly, etc.) to bring himself back to life. So, if he does end up being a true villain in GotG 3, he's going to be pretty tough to defeat.

He Has The Soul Gem

There was a time in the comics when Adam had the Soul Gem giving him more life and powers. In the MCU, however, the Soul Gem already lives within Vision. This makes sense if you believe Gunn at his word that Adam will not be involved in Infinity War.

He Has Worked With & Against Thanos

Warlock is not what you might call loyal. He doesn't feel a deep sense of duty, like Captain America, nor does he feel a responsibility to others, like Iron Man. Adam is truly a man looking out only for himself, and that's dangerous. Over the years, he has allied with both Thanos and the Avengers, and has fought against both. He's fickle, which makes him a huge wild card.

The Guardians of the Galaxy Vol. 2 post-credits scene sets Adam up as a villain, but given his comics history, it's obvious if there's one thing we know Warlock will be, it's unpredictable.