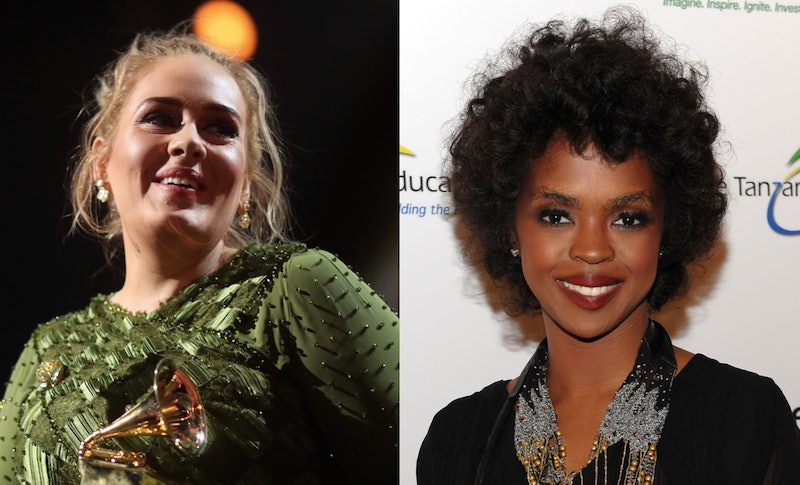 It's always amazing to see musical icons supporting each other. As BuzzFeed noted, one famous singer did exactly that recently. On Wednesday, Adele wrote a tribute to Lauryn Hill and her The Miseducation of Lauryn Hill album in honor of the record's recent 20th anniversary. And in response to her Twitter post, many others came forward to share how Hill, and Adele, inspired them.

Adele described how she's been a fan of Hill's for decades now and that the singer has had an incredible impact on her own singing career. She wrote, "I saw Lauryn Hill in 1999 at Brixton Academy when I was 10years old. Tonight I saw her play at the Hollywood Bowl. I've just turned 30!" The "Rolling in the Deep" singer continued to discuss Hill's album, The Miseducation of Lauryn Hill, which just celebrated its 20th anniversary on Aug. 25, per Rolling Stone. She said:

"What a woman what a record, by far Miseducation is my favorite record of all time. Such an honest representation of love and life, I feel I can relate too but also I know theres elements and levels i will never be able to. Ms Lauryn Hill was on from in every way possible. Thank you for the record of a lifetime , thank you for your wisdom! Thank you for existing. Happy 20th."

It's no surprise that there were many who seriously connected with Adele's meaningful message. Not only were they in agreement in regards to Hill's impact on the music industry, but they also shared just how much the "Hello" singer impacted them.

One user explained she had very meaningful experiences with both The Miseducation of Lauryn Hill and Adele's trio of albums, 19, 21, and 25. In response to Hill's album, she said that she "found beauty, grace, therapy and art all in one with the album" and that she found those same qualities in Adele's music, too.

Another Twitter user and fellow Hill fan totally agreed with Adele's kind words. They wrote that "Miseducation was our education" and that she's even going to see her on tour, which is obviously in reference to the same 20th anniversary tour that Adele attended recently.

This fan connected with the album so much that she named her daughter after it. Not only that but Hill and Adele have also helped her find her "voice and strength," which a lot of fellow fans can no doubt relate to.

Another fan also connects with The Miseducation of Lauryn Hill, even calling the album "magic."

One Adele fan said it perfectly when they related that the singer's recent sentiments are exactly how some fans feel about her. They're clearly not wrong, as all of the fans' reactions to Adele's post have shown.

Like many conveyed, it was wonderful to see Adele support her fellow music icon with her moving tribute post. And it was even more wonderful to see that her fans were not only moved by The Miseducation of Lauryn Hill but they're also moved by the "Set Fire To The Rain" singer's work as well.