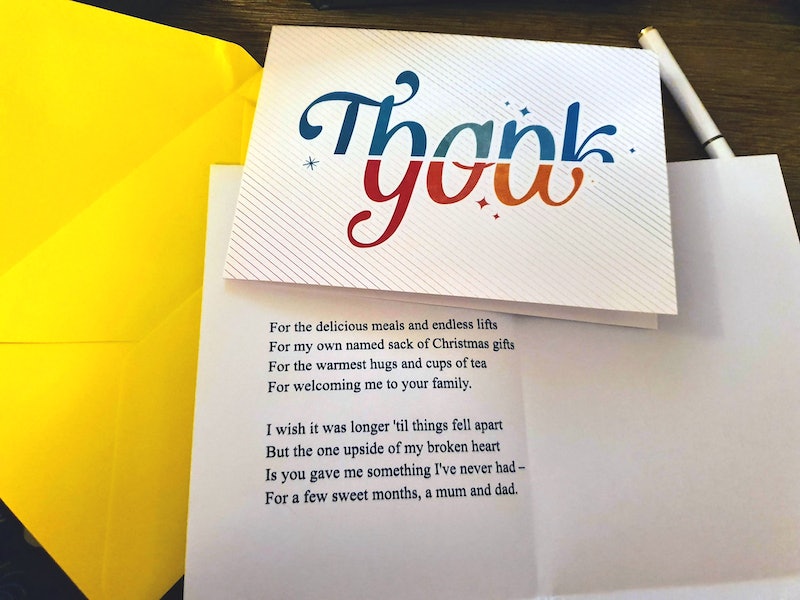 It was a bad breakup by anyone's standards: an unexpected dumping in the middle of the night, in another city, at Christmas. But as much as I cried over it, the tears that sprang to my eyes first weren't for him — they were for his parents.

My now-ex-boyfriend and I had only known each other for a few months, but it was enough time to meet his entire extended family, hold his hand through a funeral, and learn how his dad likes his tea (milky in the extreme). Meanwhile, I'd had a pretty unhappy childhood, so hanging out at the spacious family home, where he lived with his brother and parents, was like stepping into the life I'd always wished for.

Unfortunately, that wasn't so great for my fledgling relationship. I'd fast-forwarded straight past the exciting getting-to-know-you stage into the comfortable, we've-been-doing-this-for-decades rhythm of a much longer-term thing. I imagined myself with their last name, encouraged his mum when she talked about marriage, and started gently pressuring him to let me move in. Seeing the toll it took to travel three hours by train to see him, my boyfriend reluctantly agreed to let me move in. But after I'd sold my furniture and given notice to my landlady, he backed out.

Several resentful arguments later, we split up, both feeling like the wounded party. His mum cried with me as I packed up my stuff, calling me the "daughter she'd never had." She and his dad paid for a taxi to drive me all the way back to London, suitcases in the trunk, heart in the gutter. It was a horrible moment, but their kindness made the heartbreak a little easier to bear.

I knew I was supposed to pore over everything that went wrong in the relationship while crying into a bowl of ice cream. Instead, all I could think about was the gaping void his wonderful parents would leave in my life. I needed closure, the kind that only comes from a heartfelt goodbye. Which is how I ended up sending a thank you card, complete with a poem, to my ex's parents a few weeks after we split up.

If that sounds excessive, it might help to know that I'm a kind of modern orphan. My dad is dead in the traditional way, while my mum is just sort of dead to me (we have no relationship at all). So when I met his parents — who clearly adored one another and their two sons — my unloved inner child set up camp.

But as I found out when I tweeted the poem, you don't have to be a parentless waif like me to grieve the loss of a partner's family when you break up. It got a huge response: over 200 replies, more than 3,000 likes, and a ton of DMs. While there were a few trolls and thirsty "does this mean you're single now?" messages, most people completely understood what I was going through — that it felt like breaking up with three or four loved ones at once.

Reassuringly, many people said they still talk to their former in-laws, years or even decades beyond the original relationship — even if they no longer talk to the ex-partner themselves. That made me feel hopeful that I could keep these wonderful people in my life, no matter what might happen with my former boyfriend, who is pretty resolute that we'll never get back together.

It's only been months rather than years since we broke up, but after some therapy and kindness on both sides, my ex-boyfriend and I have gotten back to being friends (and yes, he apologized for dumping me at Christmas). I was even invited to his birthday party at the family home this past weekend. It wasn't the same, of course — I had to introduce myself as his friend, not his girlfriend — but I'll take "family friend" over "random girl our son once dated" any day.