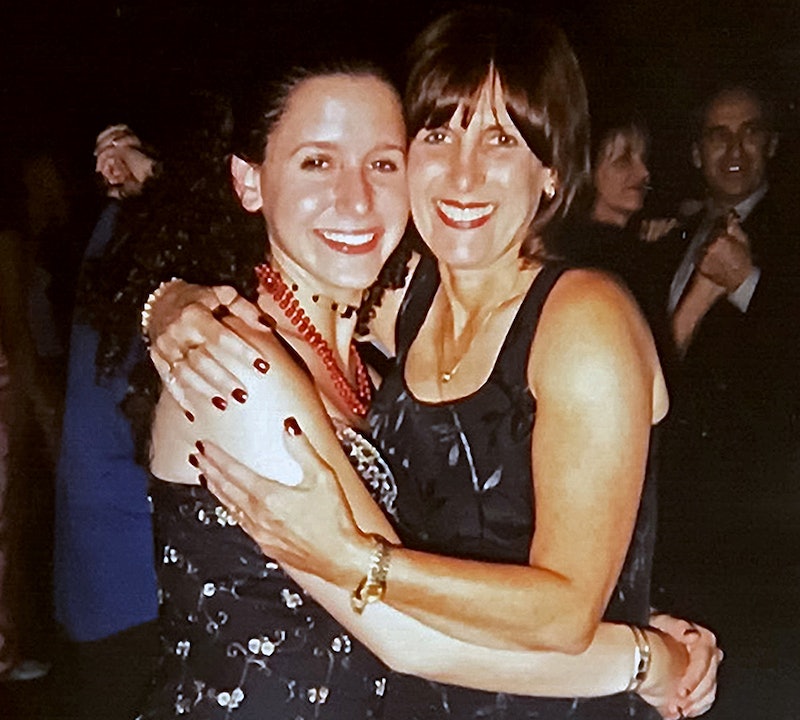 Marisa Bardach Ramel and her mother, Sally Bardach, photo courtesy of Ramel
By Alaina Leary
May 10, 2019

When writer Marisa Bardach Ramel was 17 and a senior in high school, her mom, Sally, was diagnosed with pancreatic cancer and given a prognosis of two to six months to live. One of her doctors had more optimistic hopes: Sally might live another 10 years if she had chemo every couple of weeks.

Everyone told Sally that she needed to write a book. A special education teacher, she wasn't trained as a writer, but she had always loved journaling and writing long letters to her kids and husband.

One night, about nine months after her diagnosis, Sally called her daughter, then a student at Syracuse University, with a proposal: What if the two of them wrote a book together, in alternating perspectives?

And so The Goodbye Diaries: A Mother-Daughter Memoir was born.

"When my mom and I wrote the book, we always pictured a mother and daughter reading it."

Together, the mother and daughter began mapping out which sections they wanted to write. They felt it was important that readers get both sides of the story.

"When my mom and I wrote the book, we always pictured a mother and daughter reading it,” says Ramel, who finished the book after her mom passed away in 2002.

Ramel, now 36, tells Bustle that she compiled her chapters, her mom’s chapters, both of their journals, and Sally’s medical notebooks, and used them all as resources to tell the story of Sally’s diagnosis, death, and the healing that came after.

"I had all these remnants of her thoughts,” says Ramel, explaining how she even had scraps of paper her mom had written notes on. The image of a mother’s handwriting on lined paper made me smile. I lost my mom at a young age, too, but unlike Ramel, my mom’s death was unexpected and sudden, and I was in middle school, years away from college. I still think about how, a few months after my mom died, I found her journal and letters written to her late sister, Jackie.

While Sally, who retired from teaching after her diagnosis, was able to write most of her side of the story before she died, Ramel actually wrote much of her perspective after her mom was already gone. "I think there are things you don’t fully understand as you’re going through them," she says. "You’re too in the thick of it."

She drafted many of her chapters after graduating from college and beginning her career in journalism. "I always say that my mom picked my career," Ramel says, since it was Sally who encouraged her to study writing and communications. She's not sure if she would've considered writing a book if her mom hadn't died. "I feel like her illness changed so much about what I wanted to do," she says. She applied for a job at Prevention, and in her cover letter, explained that she lost her mom to pancreatic cancer and wanted to help other women be proactive about their health.

It was the prologue and epilogue of The Goodbye Diaries that completely broke me open; I laughed, I cried, I nodded my head in agreement.

In 2013, Ramel finished a draft of the book — 11 years after her mothers death. Five years later, she signed with a publisher, just before her own daughter was born. The book’s prologue and epilogue center on her birth: "I waver between relief that I’ve filled my quota [of hardship], and worry that I should brace for the next impact," Ramel writes in the prologue. “If my family knew how many eulogies I’ve composed for them in my head, they’d probably stop hanging out with me.”

It was the prologue and epilogue of The Goodbye Diaries that completely broke me open; I laughed, I cried, I nodded my head in agreement. My friends know that every major outing with me involves taking many photographs because, like Ramel, I’m trying to create lasting memories of the people I love. I’m taking these photos just in case they die.

Writing about death and grief requires perspective. I know this because when I was 13 years old, I wrote my own memoir about the year following my mom’s death. In the years since she first wrote her chapters, Ramel has matured in ways that made it easier to finish this book. In her early 20s, she says, she would read her mom’s chapters and find them boring. And then she’d read and re-read her own sections, which were filled with stories about prom and college roommates. Now that she’s a parent, Ramel loves reading her mom’s chapters; she finds them so much more relatable than what she wrote about her own life a decade ago.

"Grief doesn’t come out the way you think it does or the way you see it portrayed in movies."

Capturing the authenticity of her experience losing her mother was important to Ramel. "Grief doesn’t come out the way you think it does or the way you see it portrayed in movies," she says. "It’s more in the everyday, little moments that it comes out." It’s in moments where she would be at a frat party with friends, everyone around her taking shots and playing flip cup, and suddenly she would be in the corner crying. I felt it while rewatching the first episode of season four of Gilmore Girls, when Lorelai moves Rory into her dorm, each fall before I returned to campus for college.

Despite the vulnerability she infuses in her writing — it’s not a very good memoir if you aren’t embarrassed about the thought of your friends and family reading it, she admits — Ramel says she’s more reserved in real life, though she’s improved from the days when she actively hid her mom's diagnosis from friends. "I think as a young person, it’s so much easier to be upset about a breakup. There’s a sense of normalcy and universality about it," she says. When I first met the woman who is now my fiancee, I kept my mom's death from her for months, thinking it was finally my opportunity to make a close friendship untouched by the intensity of my grief.

Ramel tells me that the realization dawned on her recently that her mom wouldn’t be at her book launch party. Seventeen years have passed since her mother's death, but she still feels the sense of loss immensely. I feel the same way when I think about my forthcoming wedding. I know my mom is gone and can’t be there, but a small part of me hopes she might show up. I’ve written about her oversized cat sweaters and love of Folgers coffee so many times that it almost feels as though she’s still here, the same way Sally is so present in The Goodbye Diaries, with her candid, quotidian declarations, like when she mentions that taking her bra off is the best part of the day.

“For so long, my mother’s death overshadowed all the memories that came before,” Ramel writes in the epilogue. The book’s timeline may focus on Sally’s diagnosis and the end of her life, but she’s so alive on the page. Her chapters about her deep female friendships remind me of the way my mom and her sister Jackie would sit on our living room couch and talk for hours.

The Goodbye Diaries is less about saying goodbye than it is about loving people recklessly, without any reservations or fear. “Now, with my children,” Ramel writes, “I get to share the best parts of my mother: The parts where she was alive.”

More like this
We’ve All Had Bad Sex. Nona Willis Aronowitz Is Talking About It.
By Sophia Benoit
10 Must-Read New Books Out This Week
By K.W. Colyard
Jennette McCurdy’s First Kiss On 'iCarly' Didn’t Go As Planned
By Bustle Editors
Indian Matchmaking’s Viral Revealed A Major Clue About Her Relationship With Aashay
By Radhika Menon
Get Even More From Bustle — Sign Up For The Newsletter