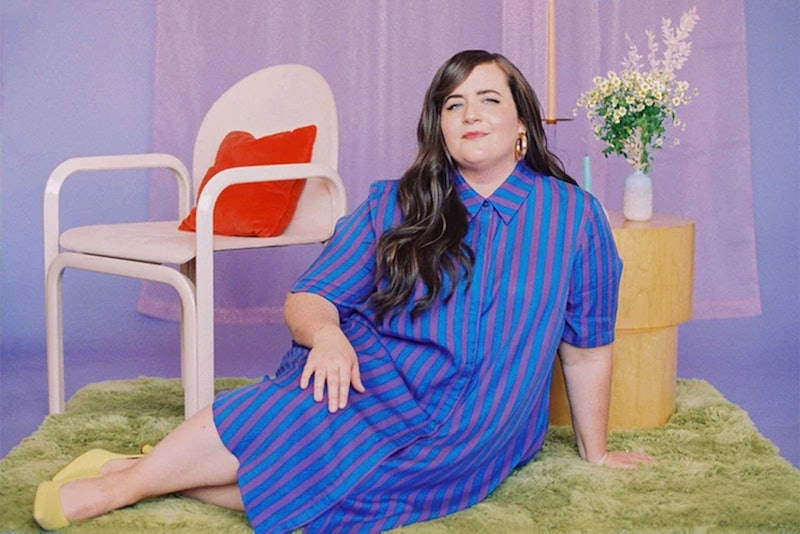 When Shrill aired back in March 2019, viewers instantly zeroed in on the main character, Annie Easton's, wardrobe. And now Aidy Bryant is launching a plus size clothing line named Pauline (offered in sizes 12 to 28) that is just as cute as Easton's closet. Bryant is the SNL-grad and actress who portrays Easton in the show, and understands the lack of cute plus size clothing. Shrill's costume designer Amanda Needham shared in an interview with Vulture that a majority of Easton's outfits had to either be made from scratch or altered if bought off the rack because of how limited plus size clothing is.

Easton herself brought up the issue with plus size clothing in Shrill's debut season, saying, "Everything is either a big Indiana Walmart sack or it is some cutesy shit covered in Eiffel Tower postage stamps." But Bryant is determined to make a dent in that problem.

Bryant's Pauline clothing line goes up to a size 28, and right now consists of one dress silhouette offered in various prints. "Pauline thinks you deserve clothes that reflect who you are. Clothes that are well-made, easy to wear, easy to dress up or down, easy to style in a way that fits you. Everyone needs a friend like Pauline," the brand's website reads.

"So here's what happened. I have been a fat lady my whole damn life and I've always been looking for clothes. And I've always felt like there were things out there but not what I wanted. And what I wanted was something that was just easy and simple and cool, but comfortable," Bryant says in a promotional video. "But I couldn't find them."

The Lovington Dress in Blue
Pauline

In the video, Bryant shares that for years she and her stylist, Remy Pearce, have been making clothes for Bryant to wear to events, appearances, and red carpets. Bryant constantly got asked by fans where she bought her clothes, but since they were made from scratch by tailors and designers, Bryant couldn't offer any links. So she and Pearce decided to make a line that would mimic some of Bryant's favorite outfits, democratizing her plus size wardrobe. Plus — Bryant highlights — the clothes have pockets!

The Lovington Dress in Stripe
Pauline

Right now Pauline is in its testing stages to gauge people's interests, which is why there is only one dress silhouette available. But if there is an interest, Bryant plans to expand her clothing line.

The dress in question is called the “Lovington” dress; it's a boxy, button-up style shift that costs $175. The dress is available in three styles: blue and purple stripes, black and blue gingham, and a solid blue.

The Lovington Dress in Gingham
Pauline

“I think the customer is there and it just seems so wild to me that still, I could probably count on two hands the number of plus size retailers that are really making stuff that I’m willing to wear, and that to me is what it’s all about," Bryant shared with Refinery29. "It’s lack of choice. How do you really ever know your style if you don’t have the breadth of choice?”

Now with the launch of Pauline, there are going to be a lot more cute plus size pieces to shop.