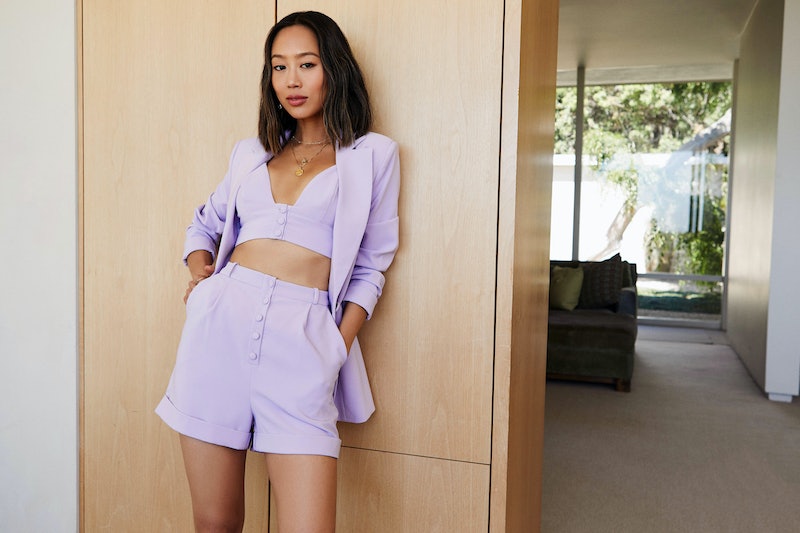 On Monday, May 13, Aimee Song can officially add fashion designer to her resume, right underneath New York Times best-selling author, Forbes 30 Under 30 honoree, and last but certainly not least, global influencer. Song has partnered with Instagram’s favorite e-tailer Revolve to launch her very first collection named after her now famous blog, Song of Style. The collection is a colorful and playful mix of suits, skorts, ruffly dresses, and poofy tops featuring fruit prints and pastel hues. The pieces come in sizes XXS through XXL, with a price range that starts at $88 and caps out under $300. When creating the collection, Song looked to ‘80s and ‘90s style icons like Princess Diana and Sex & The City’s Samantha Jones for inspiration with the goal of making sexy, empowering, and super wearable pieces for the 2019 woman. It's all meant to be representative of who Song is and who the Song of Style girl is, the influencer-turned-designer tells Bustle.

"[The Song of Style woman] is a very funny, artsy, and curious girl. [The collection] describes not just me, but also my community," Song says, over the phone. "The Song of Style community is so smart — they're savvy shoppers. They're usually the trendsetters within their own core group. They're avid travelers and also career women. That's who I design this collection for."

Song would know — this community she's grown over the last 10 years is not only loyal, it’s massive. Her 5.2 million followers on Instagram and 320,000 subscribers on YouTube have supported her every move, from her days of blogging as an interior design student in San Francisco to frolicking underneath the Eiffel Tower with Chanel and Louis Vuitton during Paris Fashion Week. She is arguably one of the most influential and "bankable" influencers in the industry and has been for years. So why did she wait so long to launch her own collection?

"I wanted to do it right. I knew if I was gonna put my name on it, I wanted to do it right and I didn't want to half-ass it. I wanted to be heavily involved," she explains. Over the last decade, thanks to her countless partnerships and collaborations with numerous brands, Song tells Bustle she's been able to learn the "ins and outs" of how a fashion company works, taking note of the ones that have come and gone and the ones that have turned into empires. Song came to the conclusion that she didn't want to launch a collection on her own.

"I just didn't have the infrastructure before. I basically was a one woman show up until maybe like two, three years ago when I started hiring help for my site and my personal brand," she says. When she felt like she could shift her focus from running her social channels to designing and building her own brand, Revolve was there, ready and waiting.

But the journey to launching her own label hasn't been easy, despite the glamorous photos and videos you've seen of Song dancing on conference tables or sunbathing on pool floats on Instagram. "It's not difficult, but it's a lot of work because I've been involved in every single step of the process," Song says. With the help of design house Alliance Apparel, Song has been able to have her hand in everything, from sketching out designs for the line and picking out fabrics to figuring out the marketing and storytelling behind every single piece. And while it’s taken months of preparation and work, on top of her already busy life as an influencer, Song is no stranger to the hustle. Growing up in Los Angeles, the daughter of two Korean immigrants, she learned the value of hard work very early on.

"I like proving people wrong and I like that I'm forging a new career path for other people."

“A lot of people come up to me… and they always say, ‘How did you do it?’ And I think sometimes they're shocked because I don't come from a famous last name. My parents are middle-to-lower class people where they’ve literally started from the bottom, and so did I. I think people are just shocked because in fashion, it’s all about the connection — you need to know somebody, you need to come from money, you need to have a famous last name. And I didn’t have any of those three things. I like proving people wrong and I like that I'm forging a new career path for other people. I mean, I know I’m not the forerunner of it obviously, but blogging and influencing was so new [when I started]. It wasn’t that long ago when editors did not welcome us because we weren't part of them. I just love that with the access that we had [as influencers], we literally were able to create something from nothing,” Song says.

That something — the Song of Style label — will not only be Song’s first fashion collection, but it will also be Revolve’s first foray into selling an influencer's collection long-term. The brand is famously known for tapping influencers and bloggers to wear clothes from the brand and while they have worked with influencers and celebrities (like Chrissy Teigen) on capsule collections before, the brand has never committed to a permanent collection until now.

“It has been a privilege to see Aimee grow into the world-renowned influencer, author, and design powerhouse that she is today,” Raissa Gerona said in a press release announcing the collaboration. “This was a natural progression in our relationship since she was one of the first bloggers we worked with in 2012. She has inspired us and our customers for so many years and we know the brand will speak to her in an even deeper way. We couldn’t be more thrilled to be supporting the launch of Song of Style and giving her community a collection they can feel good in.”

While the excitement for Song of Style’s launch is high, it might still be too early to tell just how successful it will be. Still, Song is proud and hopeful for the future of her brand.

More like this
The Fashion Blogger Behind "Christian Girl Autumn" Just Dropped A Clothing Line
By Allie Fasanella
On 'The Handmaid’s Tale,' Christine Ko Fights Back
By Gretchen Smail
Jinkx Monsoon Is About To Get Real Sketchy
By Sam Ramsden
The New Bachelor Will Be Announced Next Week & Here Are The Top Contenders
By Grace Wehniainen
Get Even More From Bustle — Sign Up For The Newsletter