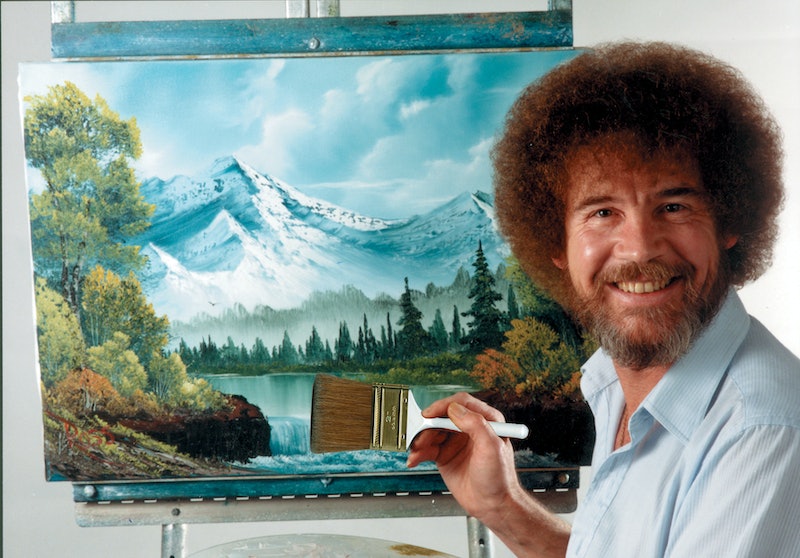 Not going to lie: Occasionally, I look at the scenery I can see outside my office window and think, “Gee, I wish I had the skill to paint all those happy little trees.” And hey, guess what? If you also sometimes find yourself in a similar boat, you can now learn to paint like Bob Ross through Airbnb. Starting today, Airbnb has launched a whole bunch of Bob Ross-themed Airbnb Experiences that will allow you to embrace your inner artist with the help of teachers local to your area who are skilled in the techniques Ross himself taught. In our increasingly chaotic and stressful world, it might be just what you need to help you unwind — and create something neat in the process.

Airbnb Experiences launched as part of the rollout of the Trips platform in 2016. Designed to “[bring] together where you stay, what you do, and the people you meet all in one place,” according to a press release published at the time, Trips both expanded Airbnb’s offerings to include more than just places to stay and made organizing your journeys a heck of a lot easier. It consisted of three areas, with the promise of more on the way: Homes, Places, and Experiences. Homes was the part of Airbnb with which we were all already familiar — rooms, apartments, and entire houses you could book and stay in while you traveled. Places brought guidebooks and insider knowledge to the table. And Experiences created adventure, enabling you to experience a particular city or area with a local to at your side to guide you.

Described as “handcrafted activities designed and led by local experts,” Experiences initially launched in 12 cities and expanded to a whopping 1,000 destinations in 2018. As is often the case with sharing economy-type things, your mileage when it comes to Airbnb Experiences may vary; for what it’s worth, though, I took a tour of speakeasies and hidden bars in Montreal through Airbnb Experiences last year and it was dynamite. So, y’know, you really can find some truly fantastic activities run by friendly and knowledgeable locals through the platform. Do your research and you’re sure to find something you’ll enjoy.

That’s where the Bob Ross Airbnb Experiences come in. Through this section of the Airbnb app and website, you can book classes and workshops taught by Certified Ross Instructors, also known as CRIs, in a wide variety of locations across the globe, including Detroit, Portland, Atlanta, Mumbai, and Leicestershire. These classes will teach you how to paint just like Bob Ross did, enabling you to fill your world with happy little trees, delightful little mountains, and beautiful little lakes. They range somewhat dramatically in cost, with the pricier ones landing in the $85-to-$95 range and the least expensive ones costing around $35; however, many of them fall in the middle, coming in at about $50 or $60 a head. The differences in price might depend on a few factors, such as the instructor, the length of the class, and the location in which it’s held.

One thing that they all have in common, though, is that the art supplies, including paints, brushes, and canvases, are generally provided; for the most part, all you’ll need to bring will be clothes you don’t mind getting dirty and a sense of fun. The details can vary from Experience to Experience, however, so you’ll want to double-check each one to make sure you don’t have to bring your own materials with you. Additionally, some Experiences might either provide other perks, or suggest that you bring a few extra things with you. For example, some of them provide drinks like coffee, tea, and water; some of them might note that you’re permitted to bring alcohol or other beverages into the studio with you, if you want to have a BYOB wine-and-painting night; some — particularly the longer classes — might suggest you bring lunch with you to eat during a break; and so on and so forth.

Bob Ross utilized the “wet-on-wet” painting technique, also known as alla prima, or “first attempt” in Italian. In this technique, which originated in Flanders in the 15th century and was later used to great effect by artist such as Monet and Van Gogh, the entire canvas is painted at once. It lies in direct contrast to what’s called indirect painting — a technique that specifically calls for each layer of paint to dry before you put anything else on top of it. Wet-on-wet painting is much quicker than indirect painting; indeed, a wet-on-wet painting can typically be finished in one sitting, sometimes in as brief an amount of time as half an hour.

The wet-on-wet technique can be used with just about any paint medium, but Ross typically did it with oils — just as he had learned from German artist Bill Alexander, whose own television program, The Magic Of Oil Painting, directly inspired Ross’ show, The Joy Of Painting. (The two men had a falling out later on as Ross grew in popularity, but to Ross’ credit, he did always cite Alexander as having taught him the technique; he even dedicated the first episode of The Joy Of Painting’s second season to his former teacher.)

Ross passed away in 1995, but even now, almost 25 years later, he remains a cultural phenomenon. Beyond the memes and other bits of internet culture that have embraced Ross as a sort of patron saint of both art and tranquility, he’s also a brand, acting as the driving force behind everything from coloring books and board games to actual painting supplies. Indeed, you can even become a CRI yourself if you feel like it — someone deemed to be skilled enough in the wet-on-wet techniques Ross taught to be able to teach those techniques to others who long to fill their lives with happy little trees.

Even if you don’t want to become a CRI yourself, though, you can still learn from one; the wet-on-wet technique is what you’ll pick up from the Bob Ross Airbnb Experiences. They’re available to book starting to today on the Airbnb Experiences platform. Find one near you — or near somewhere you’re traveling to soon — here. May your lives always be full not of mistakes, but of happy little accidents.