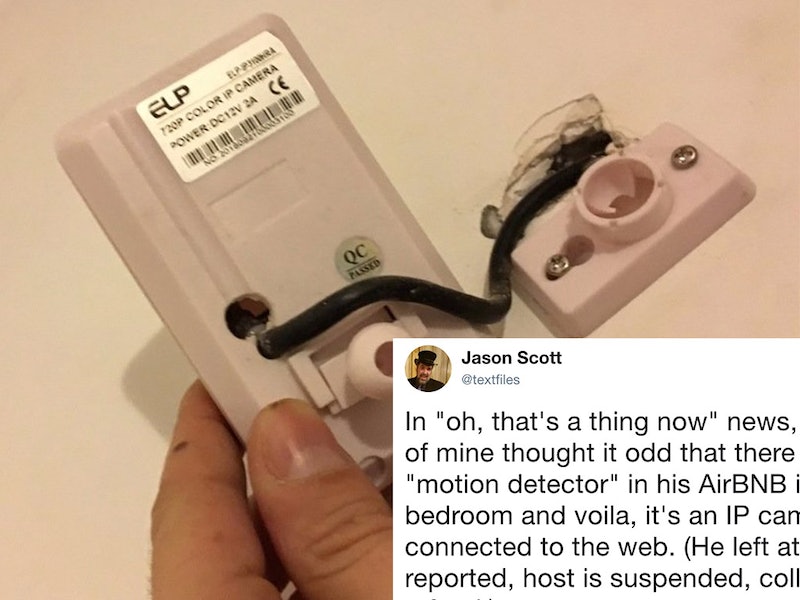 In “everything is creepy and terrible” news, you probably should start checking any Airbnb rooms you book for secret cameras. Complete with photos of the spy cam in question, one person recently took to Twitter to share the experience of a colleague who found a hidden camera in their Airbnb bedroom. In a statement made to Bustle over email, Airbnb spokesperson Jeff Henry confirmed the incident and that actions to ban the host have been taken:

“There have been over 260 million guest arrivals in Airbnb listings and incidents like this are incredibly rare. Airbnb takes privacy extremely seriously and there is absolutely no place in our community for this kind of behavior. As soon as we were made aware of this incident, we permanently banned this host from our community and supported our guests with a full refund and reimbursement for expenses incurred. Cameras are never allowed in bathrooms or bedrooms. Any other cameras must be properly disclosed to guests ahead of time.”

In his tweet that has since gone viral, Jason Scott of TextFiles.com wrote, “A colleague of mine thought it odd that there was a single ‘motion detector’ in his AirBNB in the bedroom and voila, it's an IP camera connected to the web.” Scott’s tweet also reiterates that his colleague was allegedly refunded for the room and the host was banned. Bustle reached out to Scott but neither he nor his colleague had any further comments at this time.

If you, like many of the 300+ people who replied to the tweet, are wondering if the cops were called, have no fear: they were. On Twitter, Scott clarified that the alleged incident has been reported to the police and that his colleague is currently consulting with a lawyer.

Unfortunately, this alleged incident isn't isolated. As Select All reports, a similar situation occurred at an Airbnb in Florida. A couple discovered a secret camera in their Airbnb bedroom earlier last month, concealed in what appeared to be a smoke detector. (It was actually a camera pointed directly toward the bed.) Police say they confiscated “a lot of computer storage data devices” from the host’s Florida home, including two smoke detector cameras. While the host has since been charged and banned from Airbnb, it’s worth noting he’d received over 40 positive reviews from previous guests prior to the couple’s stay.

This type of secret surveillance has happened enough that in 2015, Airbnb opened an investigation into host’s spying on guests. That investigation actually came after Airbnb had instituted a surveillance policy in 2014, specifying that devices weren’t to be installed in private spaces like bathrooms and bedrooms (places where you’re the most naked). Hosts are also required to disclose any surveillance devices in their home within their Airbnb listing. Unfortunately, as this recent story shows, creepers are not easily dissuaded from their creepy camera habits. Also, listing hidden cameras among the amenities probably isn’t a great selling point. (“Feel free to use the fridge to store food, but if you sneak-eat anything, we’ll have video evidence!”)

Not to be the bearer of creepy news, but this isn’t a new problem. Plenty of stories about hotels with secret cameras are just a Google search away. While there are laws in most states against hotels using surveillance devices in their guests’ rooms, rogue hotel employees have plenty of access to creep. Like I said, creepers are not easily dissuaded.

If Airbnb’s swift response to this most recent incident is any indication (their official Twitter account responded within the hour), guest safety is a priority for the company and they’re aware they’ve got some bugs in the system. In the meantime, familiarizing yourself with the space and looking for things that are out of place may help put the nervous Airbnb-er at ease. On the bright side, this is perhaps one of your few opportunities to say the very cool phrase, “Do a sweep to see if the room is bugged.”