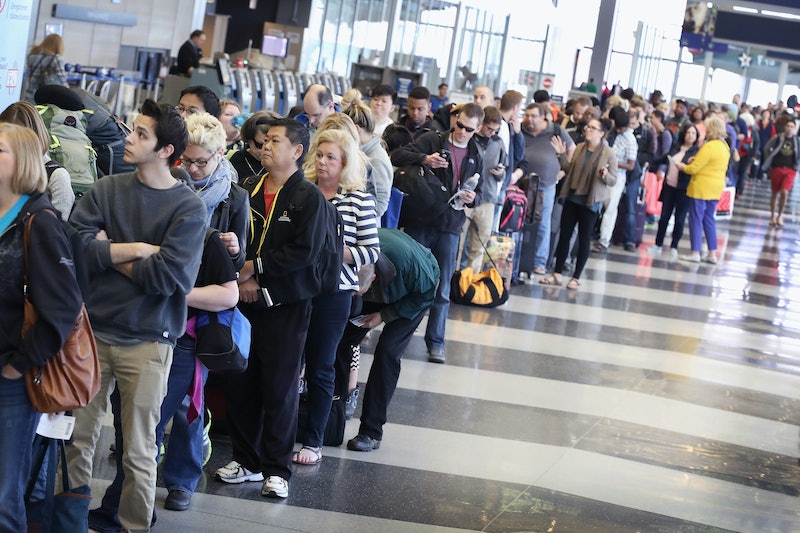 The federal government shutdown has had some far-reaching consequences for many Americans — and it could potentially affect your travel plans. As CBS reported, airport security lines during the government shutdown could start getting longer. Transportation Security Agency (TSA) agents, who conduct all security screenings, are currently working without pay, something which has already led to long security wait times at many airports across the country.

On Jan. 4, CBS noted that TSA reports revealed that a higher than average number of employees were calling out sick, resulting in understaffing and increased wait times at some airports. For example, on Jan. 4, five and a half percent of TSA workers called out sick at Dallas/Fort Worth International Airport, which is substantially higher than the typical three and a half percent, ABC reported.

Michael Bilello, the TSA's assistant administrator for strategic communications and public affairs, cited the shutdown as a possible explanation for staffing shortage. As Bilello described to ABC:

... [The shortage] could be [due to] transportation, kids are home from school for the holidays ... But, you know, there probably are some folks in there that perhaps are not coming in because they’re frustrated [with the shutdown] or because they’re looking for other jobs.

Forbes reported that TSA staffing shortages seemed to be affecting wait times at major airports beginning on Jan. 6. For example, as the outlet described, at New York's LaGuardia airport, some passengers waited at security checkpoints for around 90 minutes. The outlet noted that TSA pre-check, an expedited security screening process which passengers pay to receive, was also completely closed at at least one security checkpoint.

CBS reported on Jan. 7 that these wait times could potentially stand to get much longer by the end of the week, as TSA employees will miss their first paychecks of the shutdown period on Friday, Jan. 11. The outlet pointed out that many of the TSA's 51,000 security screeners cannot afford to not be paid and could opt to miss work as a result. Further understaffing could then produce additional delays and even more substantial wait times at airports. The news outlet indicated that the agency is working to try to find a way to pay its agents, and reported that TSA leadership spent much of Monday working on devising contingency plans.

In its most recent statement on Twitter, the TSA did not give any indication that long wait times are a concern. It emphasized that, on Sunday, "... 99.8% percent of passengers waited less than 30 minutes." The agency also added that it is " ... grateful to the more than 51,000 agents across the country who remain focused on the mission and respectful to the traveling public as they continue the important work necessary to secure the nation’s transportation systems.”

It remains to be seen how much the government shutdown will continue to affect air travel this week — and potentially beyond. If you're planning to travel in the near future, check your local news for possible updates on your airport's security wait times — and make sure you arrive well ahead of your flight's departure time to account for any possible delays.