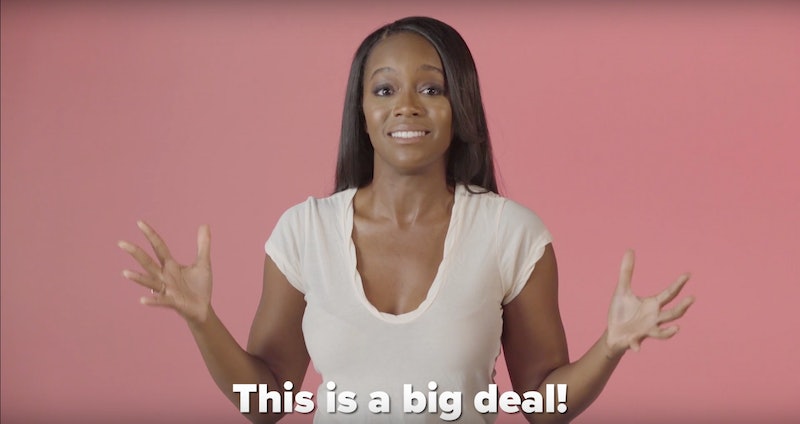 How To Get Away With Murder's Michaela Pratt spent notably less time last season covering up murders — and far more pushing to protect civil rights using the country's court system. Now, the actress who plays Pratt is stressing the importance of using your right to vote for much the same thing. HTGAWM star Aja Naomi King's midterm election message underlines the importance of voting, Bustle exclusively reports.

In a video posted to YouTube Wednesday, King emphasizes the outsize role the Nov. 6 vote can have — especially for those who care about climate change, health care, abortion rights, and stopping "hateful policies against immigrants, black and brown people, and the LGBTQIA community."

King filmed the video as part of the Show Up 2018 voter turnout drive that is using digital and social media to reach what they say are 140 million Americans who didn't vote in the last midterms — particularly the 40 million millennials.

"Whether it’s getting access to contraception, keeping young immigrants with their families, or making sure black and brown people aren’t unfairly profiled by law enforcement, there will be very real consequences to voting in the Midterms on November 6," King tells Bustle in a statement. "Make sure your voice is heard, because whoever we elect will make critical decisions about our lives and our bodies and our futures."

There are no doubts about King's priorities — or the campaign's, which has also featured a video from the Kaplan Twins and another talking about the importance of judges. They are hoping that young people who see the videos will recruit at least one new person to register to vote and then go to the polls.

King explains the significance of this year's midterms in the video. "Aren’t the midterm elections the ones where they choose jobs with names like ‘insurance commissioner or county assessor?’" King asks. "Well, yes, but it’s also the election we decide on: all 435 seats in the House of Representatives, one third of all U.S. senators, 36 state governors, and the attorney general in 30 states and D.C. This is a big deal. These are the people who create the laws that affect all of us every day."

How To Get Away With Murder fans might not be familiar with King's views on voting — but they know Michaela is the one to get the gang out of any jam (even if it means calling ICE on her own classmate and getting him deported... poor Simon!). King, it seems, would argue that voting is the way to make things happen in real life, like getting "more young people, women, and people of color representing you in office."

Gareth Rhodes, the executive director of Show Up 2018, tells Bustle in a statement that the campaign's goal is to convince young Americans that "their vote — and the vote of their plus one — is needed now more than ever."

"Over and over again, we’ve heard non-voters say they just ‘aren’t political,’ but we know they do care about the issues that are at the center of today’s political debates," Rhodes says in the statement. "With our campaign, we hope to help these Americans make the connection between the act of voting and their ability to shape how these issues affect their lives."

In many states the last day to register is fast approaching. And if you want to "be a voter" like King suggests, you'll want to register today.