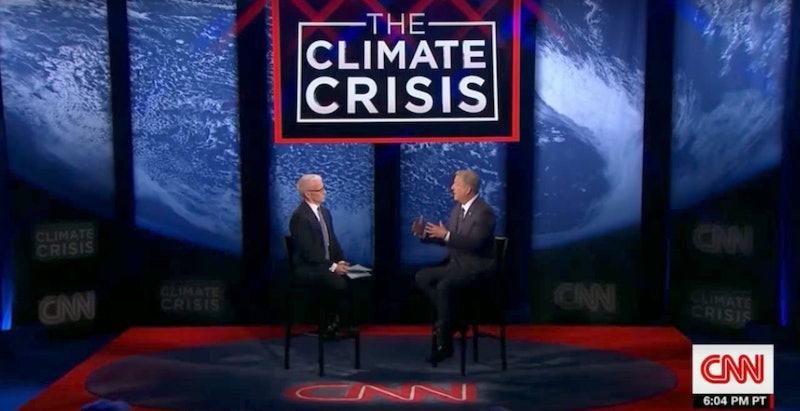 On Tuesday evening, CNN aired a town hall with Al Gore, former vice president and climate change activist. During the event, he answered various questions from audience members on global warming and how humans are impacting it, but also reminded Americans that stopping the climate change crisis is still a very real possibility. And that's a welcome message, especially considering the Trump administration's attitude towards the issue.

As CNN reported, Gore told audience members that while weather and other changes will likely occur in the future due to climate change, there is a still a lot people can do to slow down the climate change trajectory — and maybe even stop it.

Gore also added during his town hall that there are really only three remaining questions to answer in regards to the climate change crisis: "Must we change?"; "Can we change?"; and "Will we change?" In regards to the first question, Gore noted that more than sufficient evidence, including extreme weather events, establishes that people must change their behaviors in order to slow down climate change and its negative effects.

The second question gets at if and how we, as human beings, are able to stop climate change. According to Gore, people absolutely have the ability to help eradicate climate change through changing their behaviors and using new technologies, including solar panels, wind mills, batteries, LEDs, electric cars, and more. As Gore put it, technological advancements have allowed us to get to the point where "we really do have the ability to solve this."

However, as Gore noted, the true challenge lies in whether or not people will actually choose to try to actively stop climate change. As Gore pointed out during the town hall, while we possess the ability to flight climate change, "it is up to us," whether we choose to do so.

Furthermore, as Gore noted in an interview with Stephen Colbert prior to his town hall, in addition to using the aforementioned technologies, the best ways to help end climate change consist of using your voice to advocate for policies that help fight climate change and using your vote to help elect officials that will enact these policies.

Moreover, Gore added that the existence of the Paris climate accord is also proof that the world is willing to take action to end climate change, though if you wish to see the U.S. re-enter the agreement, then it is important to engage in advocacy.

Overall, it is clear that Gore truly believes that the world can win the fight against climate change — people just have to be willing do the work that it will take to make this happen.