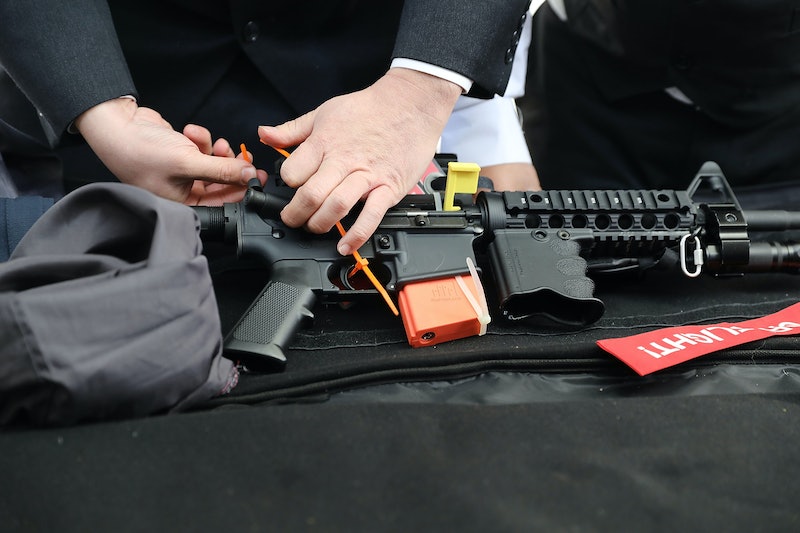 This Memorial Day weekend, Alabama GOP candidate Rich Hobson is raffling off an AR-15 to a complete stranger. Hobson, who is running for Congress in the second district of Alabama and is a longtime fan of gun ownership, is holding the giveaway as a means to show his support for the Second Amendment. Hobson has confirmed that the stranger will go through a background check prior to receiving the automatic weapon.

According to The Hill, Hobson previously served as Senate candidate Roy Moore's campaign manager. Now, he is running for office himself, and his platform is crystal clear. Upon announcing the giveaway, Hobson emphasized the ability for homeowners to defend themselves.

"Because of that," Hobson articulated in his website, "I believe that it is right and proper for every family in the country to own an AR-15 Defense Rifle." To enter the contest, all a person has to do is enter his or her name, phone number, email address, and mailing address, Slate reports. Hobson will pull the name on Memorial Day because, in his own words, “It seems only fitting that we would do so on the day that we use to honor those who died defending our freedom.”

The AR-15 might just be the most controversial object in the United States for 2018, given its repeated role in public shootings. According to USA Today, the AR-15 has been the weapon of choice for several notably violent shootings in recent history. That includes the shooting in Las Vegas which killed over 50 people, the Sandy Hook shooting, and the recent shooting in Parkland, Florida, that inspired the March For Our Lives Movement.

The AR-15 isn't simply a gun that can shoot quickly, though. Because of the force with which bullets leave the chamber, radiologist Heather Sheer wrote via The Atlantic, the wounds that result from an AR-15 are infinitely more damaging.

"If a victim takes a direct hit to the liver from an AR-15, the damage is far graver than that of a simple handgun-shot injury," Sheer explained. "An AR-15 bullet wound to the middle of the liver would cause so much bleeding that the patient would likely never make it to the trauma center to receive our care."

The civilian use of automatic weapons such as AR-15s has become a central topic in the modern debate over gun laws, with the March For Our Lives Movement listing a federal ban on all assault weapons as one of its five central goals.

For Hobson, the fight for a congressional seat won't simply be determined by the success of this giveaway, though it's certainly bound to draw a line in the sand for his voters. He's currently vying for the seat against four other Republican candidates, including the current congressional representative for the district, Martha Roby.

Hobson cited other key aspects of his platform, emphasizing limited government involvement in state activity, the construction of a wall on the United States-Mexico border, and the need to repeal Obamacare entirely. He also supports ceasing funding to Planned Parenthood, and wants to encourage free-market principles within the economy.

Before running for office, his About page reveals that Hobson has had a long career within the Alabama legal system, working as the Administrative Director of the Alabama Judicial System for two separate terms, as well as serving as a former adjunct professor in the Department of Criminal Justice at Faulkner University.