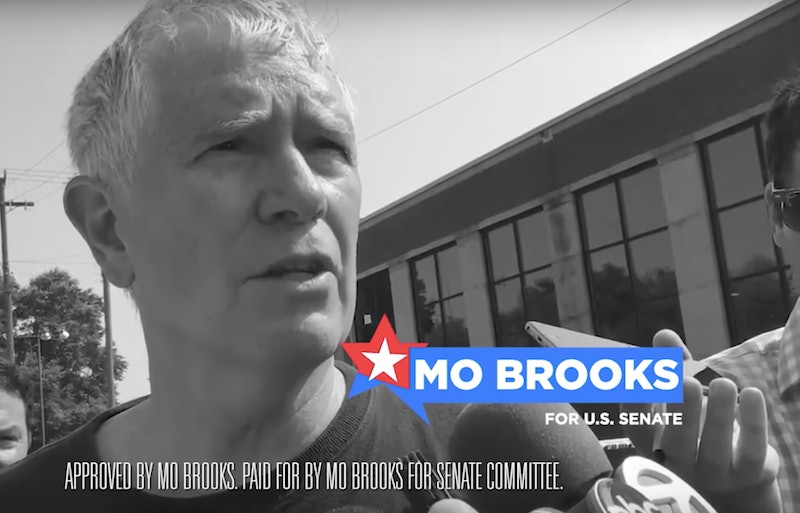 In a new ad for his Senate campaign, Alabama Rep. Mo Brooks used audio from the Republican Congressional baseball practice attack to try to make a point about the Second Amendment. "June 14: A Bernie Sanders supporter fires on Republican congressmen," the commercial's captions display, as viewers hear gun shots fired. "Mo Brooks gives his belt as a tourniquet to help the wounded."

Afterward, the clip cuts to a post-attack clip in which someone asks Brooks about whether the shooting made him think differently about gun control. Brooks capitalizes on the situation as a way to target the media — a favorite punching bag for the GOP — and includes his staunch defense of private citizens' right to bear arms as dramatic music begins to play in the background.

Brooks is one of the 11 Democrats and eight Republicans vying for the Senate seat Jeff Sessions left after he was appointed attorney general by President Donald Trump. Brooks's candidacy has been endorsed by many conservative leaders, such as Fox News's Sean Hannity and Mark Meadows, chairman of the House Freedom Caucus.

"Mo Brooks is a fighter," Meadows said in a statement. "He has the most conservative voting record in the Alabama congressional delegation. He's got an A-rating from Numbers USA and the NRA. He has proven himself to be a proven constitutional conservative in the mold of Ted Cruz, Mike Lee, Rand Paul and Ben Sasse. We need more like him in the Senate."

Despite these high-profile endorsements, Brooks does lack one very important stamp of approval for hard-right candidates: the National Rifle Association's. The NRA chose to endorse Brooks's main competitor, Sen. Luther Strange, who was appointed to fill Sessions's vacant seat by then-Gov. Robert Bentley. "Throughout his career, Sen. Strange has shown tremendous leadership in protecting our fundamental right to self-defense. As a champion for gun owners in Alabama and across the country, Sen. Strange is the right person to succeed Jeff Sessions as U.S. senator," said Chris Cox, chairman of the NRA Political Victory Fund in a statement.

Back on the Hill, however, people had mixed feelings on Brooks's new ad. According to a tweet by an NBC News producer, a spokesperson for Republican Steve Scalise, who was injured during the shooting, was dismissive of Brooks' editorial decision to make a political point from the attack: “I guess some people have their own ideas about what’s appropriate.”