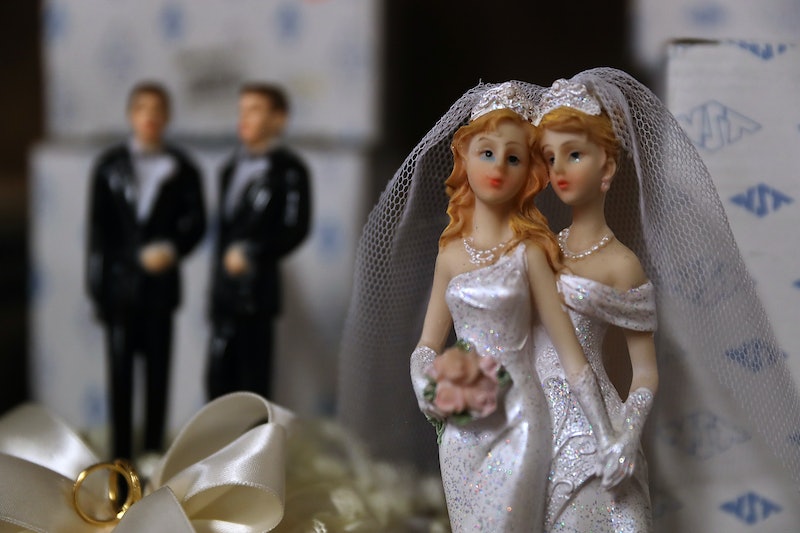 In response to some conservative probate judges' continued refusal to issue marriage licenses to same-sex couples, lawmakers in Alabama passed a bill ending the marriage license requirement. Under Alabama Senate Bill 69, which passed the state's House on Thursday and now heads to the governor's desk, couples will no longer need a probate judge to sign and issue a marriage license in order to be wed.

Under the bill, the state of Alabama would no longer issue marriage licenses signed by probate judges. Rather, couples seeking to be married would submit to a probate judge certain necessary forms and data along with sworn affidavits affirming they meet the state's legal requirements for marriage. Those submitted documents would then be recorded by the judge as the official marriage document.

"This bill would specify that the judge of probate would have no authority to reject any recording of a marriage, so long as the affidavits, forms, and data are provided," the text of the bill reads. If signed by the governor, the bill would also eliminate the state's requirement that a marriage be "solemnized" by a qualified person to be considered legally valid.

However, not every Alabama legislator supported the bill, which passed the House in a 67-27 vote, according to the Associated Press. Alabama House Rep. Neil Rafferty voted against the bill, telling Alabama Local he found it to be "less about good governance and more about protecting folks that don't want to do their jobs" because of personal beliefs. The openly gay state legislator went on to say that although the bill "does create a system that treats everyone equal before the state," he felt "it was born out of prejudice."

But supporters of the bill have argued that it's a solution to a problem the state's had since the U.S. Supreme Court legalized same-sex marriage in 2015. "This helps everybody in the state," the bill's sponsor, Alabama state Sen. Greg Albritton, told the Associated Press.

In comments to Alabama Local, Alabama Rep. Wes Allen said the bill solved an issue that had stopped him from issuing marriage licenses in 2015, when he served as a probate judge. "I believe marriage is between a man and a woman, as do a lot of Alabamians,” the news outlet reported the legislator said. "The probate judge has to sign the marriage license. And effectively, by your signature going on that marriage license, basically in my opinion, you're endorsing it. Because it's your signature, just like you're signing a check, you're endorsing it an d that was one of the objections that I had back in 2015."

Since the legalization of gay marriages, a number of conservative probate judges in Alabama have, like Allen did, opted to not issue marriage licenses to anyone so as to avoid having to issue them to same-sex couples, the Associated Press has reported. It was unclear to Bustle as of Saturday afternoon whether or not Alabama Gov. Kay Ivey planned to sign the bill into law.