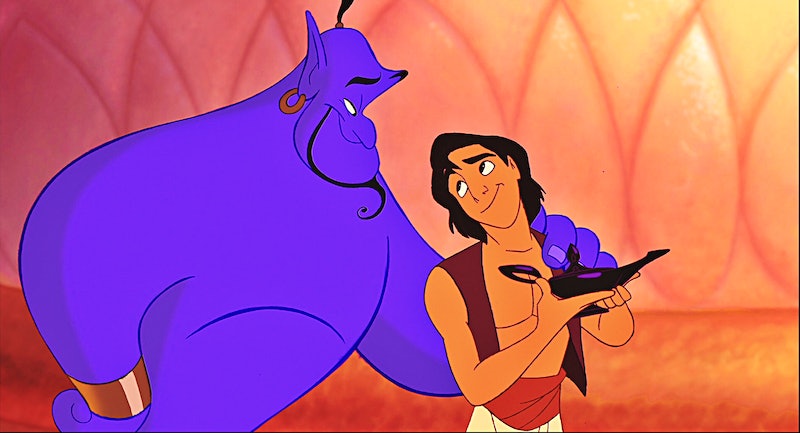 The original Aladdin is an undisputed classic. Even with the Will Smith-led reboot, fans of the original wouldn't change a thing about the animated movie. However, it wasn't always meant to end the way that it did. Actually, Genie's original ending as the peddler was revealed by the director Ron Clements in a recent interview with USA Today. Clements first confirmed the fan theory that Genie was also the peddler to E! News in 2015, but provided USA Today with exclusive footage of the '90s movie's original ending, published on Aug. 26.

At the beginning of the movie, there was a turban-wearing street peddler holding Genie's lamp, who was also voiced by Robin Williams. The movie was originally supposed to have a full circle ending with that man transforming into Genie. Clements said, "That was always the intention in making the movie. The end would be this reveal – this man with the turban in the beginning was, in fact, the Genie."

He said that ending "was eliminated as Aladdin continued to evolve." Instead, the movie concluded with a happy ending for Aladdin and Jasmine on a magic carpet ride, which was a very safe way to end things and cleanly conclude the story. Clements continued, "In terms of aesthetics, it's better to end quicker."

Aside from a having a more simple ending, there were also some difficulties behind-the-scenes while the movie was in production. The director admitted, "That last year of Aladdin was extremely intense" and as a result, the plot shifted.

However, it's not super shocking that Genie and the street peddler are actually the same character. Looking back, there are a couple obvious signs that support this fan theory. First off, Williams voicing both of the characters in the original animated version was a major giveaway that they were actually in one in the same. Additionally, both Genie and the peddler only have four fingers on each of their hands.

There was enough circumstantial evidence to support the originally intended ending: the peddler hopping off of his camel and transforming into Genie. It would have made sense to fans, and additionally, it was actually an idea that Clements said did well with test audiences who saw the storyboards.

Still, the director stands by the way Aladdin ultimately concluded. He shared, "I have no big regrets about the way we ended up the film." He also told USA Today that he was surprised by the fascination with the film and all of the thought that the audience put into its plot.

Clements reflected, "When we did Aladdin, that was before the internet. We never anticipated things would be so analyzed and there would be all of these fan theories." And this case, the "theory" was actually correct, at least originally.

Ultimately, Clements views the continued interest and speculation as a good thing. He told USA Today, "All this discussion is fun." He also said, "I’ve debunked a few myths out there. But there are some that are right on."

And now fans can actually see this scene for themselves by watching the Aladdin Signature Collection, which was digitally released on Aug. 27 and will be available on Blu-ray on Sept. 10.

It's not exactly a huge change to the plot, but it is interesting that there's a fun twist to discuss during conversations about the 1992 film.