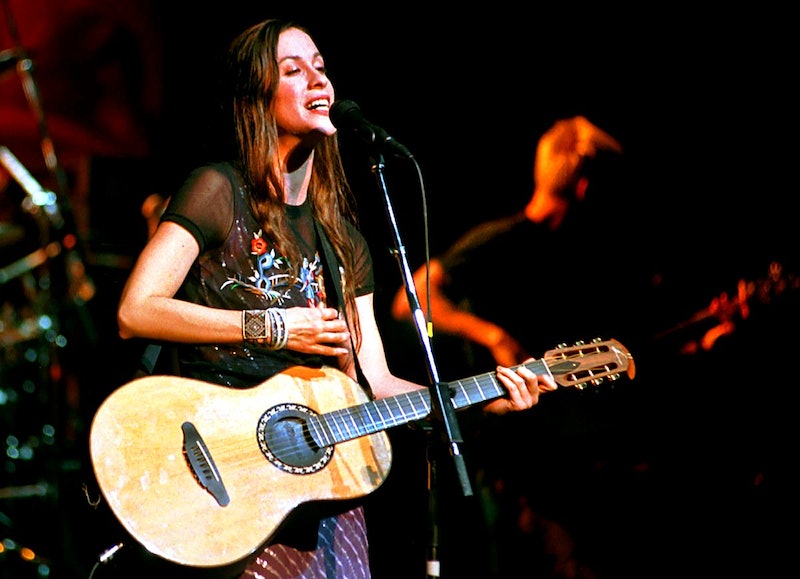 One '90s rock icon is planning to use 2020 to remind you of how much her music influenced your entire life. Alanis Morissette is going on a Jagged Little Pill anniversary tour, as announced on Monday, Dec. 1, and it's essentially tailor-made for lovers of girl power-fueled '90s rock. It's also just ideal for everyone who still thinks about that ex who broke their heart as a teenager in the '90s.

To celebrate the 25th anniversary of her seminal classic, Morissette is embarking on a 31-date North American tour in the summer of 2020, kicking off the trek in Portland, Oregon, on June 20. But she's not hitting the road alone. The singer will be joined by fellow '90s female rock icons Garbage and Liz Phair, who are also celebrating the 25th anniversaries of their debut albums Garbage and Exile in Guyville, respectively. Needless to say, it will be an angsty night to remember.

Of course, fans are already basking in glory of '90s grunge nostalgia, taking to social media to share their excitement for Morrisette, Garbage, and Phair joining forces. In the words of Twitter user @poopwitch, everyone's "sad little '90s hearts" are completely ready.

Luckily, fans have a little time to prepare their bank accounts for tickets. Presales for the tour kick off on Tuesday, Dec. 10, and tickets are set to go on sale to the general public on Dec. 13. Every ticket purchased will come with a digital copy of SUCH PRETTY FORKS IN THE ROAD, Morissette's first new album of original material since 2012, which is due to be released on May 1.

Nostalgia for Jagged Little Pill just might be at an all-time high right now. The news of Morissette's anniversary tour comes on the heels of the new Broadway musical based on the hugely impactful album, which has been in the works since 2013, as per Rolling Stone. The musical, which is penned by Oscar-winning writer Diablo Cody, is currently in previews and officially opens at the Broadhurst Theatre on Friday, Dec. 5.

While the musical has received rave reviews from critics, the new tour is the perfect chance to relive their teenage angst by seeing Morissette in the flesh — and without traveling to New York. Just thought you oughta know.

More like this
The Jonas Brothers' New Album Has A Very Meta Name
By Alyssa Lapid
The Spice Girls Are Set To Reunite At King Charles III’s Coronation
By Sam Ramsden
Cruz Beckham Teased New Music With An Adorable Nod To Mom Victoria Beckham
By Stephanie Topacio Long
'Friends' Star Maggie Wheeler Offers Support To Matthew Perry After Reading His Memoir
By Alyssa Lapid
Get Even More From Bustle — Sign Up For The Newsletter
From hair trends to relationship advice, our daily newsletter has everything you need to sound like a person who’s on TikTok, even if you aren’t.