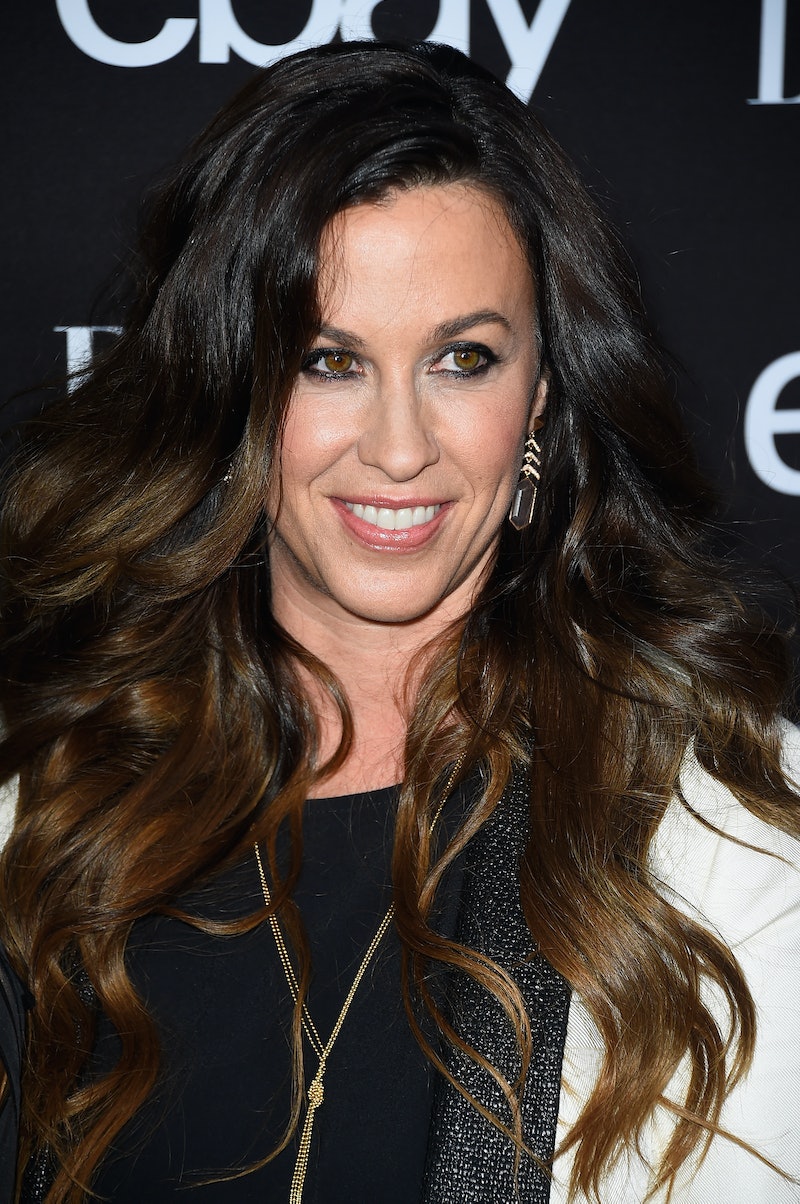 It's a majorly exciting time for a certain singer: Alanis Morissette welcomed her third child with her husband Mario Treadway on Thursday, Aug. 8, according to People. The couple took a few days to enjoy the milestone by themselves before sharing the good news on Instagram. As revealed in her IG post, Morissette's new baby's name is such a powerful choice: Winter Mercy Morissette-Treadway.

Along with a black-and-white photo of her son wrapped in a blanket, Morissette wrote:

The singer has not yet shared the meaning behind her son's unique moniker. However, it's interesting to note (and perhaps coincidental) that Morissette did record a song entitled "Mercy" for Jonathan Elias' 1999 album The Prayer Circle. Could it be that she felt some kind of connection to the song, and the meaningful word, and decades later gave her child the interesting middle name? It's possible.

But, whether or not there are any shreds of truth to that theory, Winter Mercy is a lovely and strong name. According to Baby Name Wizard, "Winter" can mean renewal or rebirth, tied to the season's changing. Meanwhile, "Mercy," by definition, is about having compassion. As People noted, Morissette and her husband gave their two older children similarly unique names. They named their 8-year-old son Ever Imre, and their 3-year-old daughter Onyx Solace.

Morissette's husband, Treadway, also highlighted the news on Instagram, posting the same photo of the newest addition to their family. Alongside the photo, he wrote a lovely message in honor of his wife, writing, "@alanis You will forever be my heroine. thank you for your warrior strength and ability to so deeply love." He also added, via a hashtag, that baby Winter, like his elder siblings before him, was born at home.

Morissette first revealed that she was pregnant with her third child back in March via Instagram. The "Jagged Little Pill" singer posted a black-and-white photo of herself sporting a growing belly. Not only did the post serve as an announcement about her third pregnancy, but it also served as a way to announce that she was in the midst of recording new music. She captioned the photo with the all-encompassing, "so much NEWness... ❤️❤️❤️❤️🙏🏻🙏🏻🙏🏻🙏🏻🙏🏻🙏🏻🙏🏻🙏🏻🙏🏻🙏🏻🙏🏻"

In the past, Morissette has opened up about the journey to becoming a mom-of-three. During an interview with SELF, published in June, she told the publication, "Between Ever and Onyx there were some false starts,” she said. “I always wanted to have three kids, and then I've had some challenges and some miscarriages so I just didn't think it was possible.” She went on to explain her feelings in regards to her pregnancy losses,

“I [...] felt so much grief and fear. I chased and prayed for pregnancy and learned so much about my body and biochemistry and immunity and gynecology through the process. It was a torturous learning and loss-filled and persevering process.”

Ultimately, after experiencing such heartbreak and difficulties, and thanks to what SELF classified as "luck and resources," the musician was able to bring her third child into the world.

Now that Morissette has welcomed baby Winter Mercy into the world, the singer can simply enjoy taking care of her new bundle of joy, and it's such a wonderful, special thing to see.