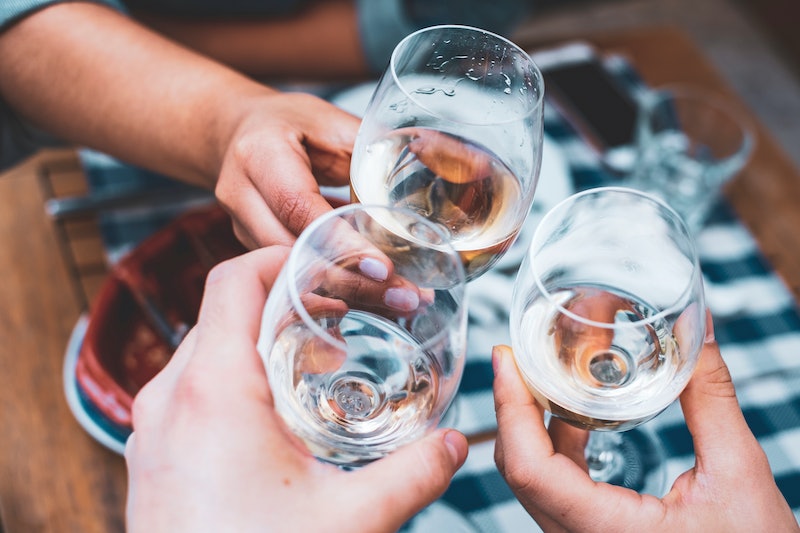 The day after a night out on the town can be brutal — headaches, nausea and the feeling that your tongue has been used as a carpet — but for some people those symptoms and others can hit after a far smaller dose of alcohol. Alcohol intolerance isn't an allergy in the strictest sense, experts tell Bustle; instead, it's often an issue with the processing of alcohol in the body's digestive system.

Alcohol intolerance tends to be genetic, and to understand how it works, you need to know how alcohol is digested by the body. Alcohol dehydrogenase is a collection of enzymes in the liver that break down alcohol properly in our systems to help us process it. "Alcohol is metabolized into acetaldehyde [in the body] by alcohol dehydrogenase," Dr. Benjamin Voight, PhD, an associate professor at the University of Pennsylvania's Perelman School of Medicine, tells Bustle. "Acetaldehyde itself is toxic, and when accumulated causes flushing and is associated with the feelings we associate with hangovers." Acetaldehyde is part of the reason that hangovers are so horrendous. However, alcohol dehydrogenase quickly changes acetaldehyde into something else: "a less harmful intermediate acetate," Dr. Voight says, otherwise known as vinegar. The acetate can then pass harmlessly through the body.

In people who have alcohol intolerance, the second part of the process doesn't work. Acetaldehyde isn't converted into something harmless; instead, it hangs around in the body and causes toxic reactions like skin flushing and nausea. Dr. Voight tells Bustle the gene responsible for this is known as ALDH2, and that mutations of this gene appear to be directly linked to intolerance.

Figuring out the exact prevalence of alcohol intolerance is difficult, because it's a complicated condition. Science does know that it's more common in certain populations than others; people of East Asian descent, in particular, can be prone to what's known as the alcohol flush reaction, where the face flushes with red spots after exposure to alcohol. Another study in Mainz, a wine-producing region of Germany, in 2012 found that 7.2% of respondents experienced symptoms of alcohol intolerance to wine, particularly red wine, including flushed faces and nasal congestion. If you have an alcohol intolerance, you can experience symptoms as diverse as headaches, hives, or nausea.

However, not all alcohol intolerances are physical. Psychosomatic alcohol intolerance can also occur. Dr. David A. Kareken, PhD, a professor of neurology at the Indiana University School Of Medicine and expert on alcohol use disorder, tells Bustle this can develop in a couple of ways. "The most direct example is the acquired aversion to a particular kind of alcohol after drinking to the point of becoming sick," he says. This tends to be focused on one particular beverage, like beer or cocktails; if you overdo it one Fourth of July and can never look at a jello shot again, this is why.

However, Dr. Kareken says, coming from a family with alcohol use disorder can play a role. "There are individuals with a family history of alcohol use disorder who, through observational learning, swear to stay away from alcohol," he tells Bustle. "This kind of aversive learning likely uses brain structures including parts of the amygdala." People with a genetic history of alcoholism might actually be able to hold their alcohol very well — but if they're mentally averse to it, they're not keen on tasting a drop.

Tests for alcohol intolerance can isolate whether you're unable to digest the alcohol itself, or are actually allergic to some of its components, like the yeast in beer or the additives in whiskey — which is more likely if you're not of East Asian descent. If you do happen to be intolerant, genetics are to blame, and there's not very much you can do about it — aside from sticking to soft drinks.