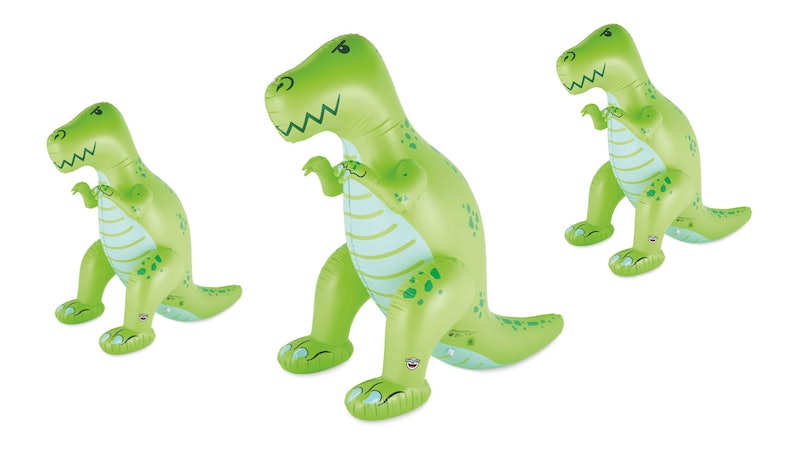 Thanks to some pretty extreme heatwave weather this summer, keeping cool has been more essential than ever. With temperatures climbing to well over 30 degrees at points, it has been a real struggle to find ways to beat the heat. Whether you walk around with an ice pack on your forehead or carry literal ice cubes, almost anything goes when it comes to ways of staying cool. But Aldi's new dinosaur sprinkler just might blow all your other methods out of the water.

Now this is no run of the mill sprinkler. To start with it's in the shape of an inflatable dinosaur. So if you feel like your garden could use a Jurassic touch to spice up summer garden parties and barbecues, look no further. As the Liverpool Echo reports the dinosaur sprinkler stands at just over six feet tall. But despite its size, it's actually super easy to operate. You simply connect the dinosaur to a garden hose and then voila water will spray out of its nose. So what about the price? Well £39.99 per dinosaur might seem like a lot for a novelty inflatable sprinkler but lets face it, you can't put a price on cooling down during a heatwave. Can I get an Amen?

It continued: "As far as summer water toys go, this one isn't only one of the biggest. It's also one of the best. You and your kids will spend hours outside enjoying water play on hot days. The blow-up, six feet tall sprinkler toy is easy to set up and super simple to use too. All you have to do is inflate, connect to a hose and turn the water on. Great for birthday parties and heat waves, its not just a kids water sprinkler. Adults will love it too." Sounds like a summer necessity to me. Relaxing in the garden during the sunny days with a six foot tall dinosaur sprinkler is exactly how I'm looking to spend my summer. Thanks for helping a girl out, Aldi.

But the supermarket chain hasn't just stopped at the dinosaur. Oh no, as The Sun reports, they have brought other magical, mythical creatures into the mix too, with a unicorn sprinkler. So if dinosaurs sprinklers aren't really your thing, you're still sorted. Do gardens get any better than an inflatable dinosaur sprinkle in one corner and a unicorn one in the other? I doubt it. Think of the social media snaps you could take. Iconic.

The sun might come and blast it's rays but luckily we're now armed against it. No more running for cover in a dark, cool room. We can finally enjoy the outdoors, while staying relatively cool during the heatwave. I reckon with one of these inflatables in your garden, you'll really be the envy of all your friends. Just don't forget your sun cream. Oh and maybe a swimsuit.