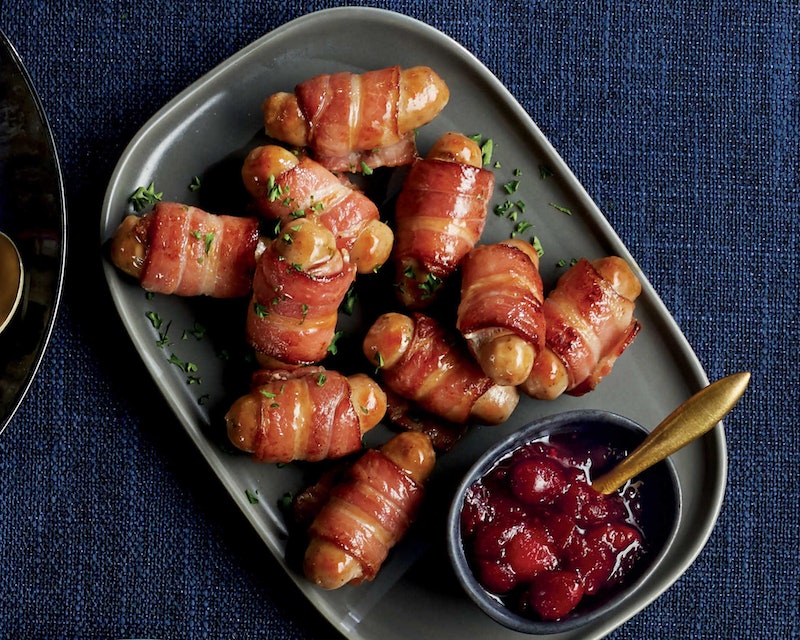 Ahhh Christmas time. The perfect time of the year to celebrate family, friends, giving, and good cheer. A time to sit and take stock of what's important in life. To wonder at the brilliance of your loved ones. And also to scoff so much food and alcohol that you end up with an extra chin. And also, let's be real, a certain shade of grey by the end of it all. At this time of year, lots of supermarkets compete to stand out from the rest with their Yuletide specials, but Aldi's two-metre-long pigs in blankets may just be the biggest stunt yet.

Big as in literally and figuratively. In a season famed for excess, Aldi have seriously outdone themselves. And who can blame them really? Considering the amount of offerings due to hit supermarket shelves in the upcoming months, it's important to have something mega to bring people to your store.

So, the two metre, yes two metre, pig in blanket is exactly what it says on the tin. And I know what you're thinking: how many effing cocktail sticks would you need to hold that mofo up? Don't worry, y'all, that would be ridiculous and Aldi knows what's up. Although TBH a big pig in blanket conga line could be quite fun really couldn't it? No, they have it twirled up like a mega Cumberland sausage. Like the meatiest wagon wheel you've ever seen.

According to a statement sent over from Aldi, the wagon wheel comes in at £4.99, and is Red Tractor approved. Which seemingly means it's the very best quality meat.

Aldi also states: "This impressive novelty Pig in Blanket is the longest in the UK (yes, we checked), measuring in at a whopping six foot five – the height of a basketball player!"

Yes, you read that right. For the purpose of scale, this sausage is a mere two inches shorter than Love Island's resident hunk and gentle giant Ovie, according to his profile on the ITV website. God even saying his name makes me a bit giggly and I'm not even straight. So, if Ovie were to stand holding this sausage, it would basically be as tall as him. Which is a lot to think about on so many levels.

The meaty wheel is due to hit the shelves at Aldi on Dec. 5, and it's sure to be a huge hit with those in search of some excessively delicious delights this Christmas. However, as it will be a special buy product, you'll need to be hot on the heels of this sausage wheel because it won't be around for long.

After all of that meat though you'll probably need a digestif. A little tipple to wash everything down with. Well, guys, as if they haven't already done enough, Aldi has you covered on that fron too. Their limited edition candy cane gin liqueur will not only give you a bit of a boozy kick but also hopefully sort out that sausage breath.