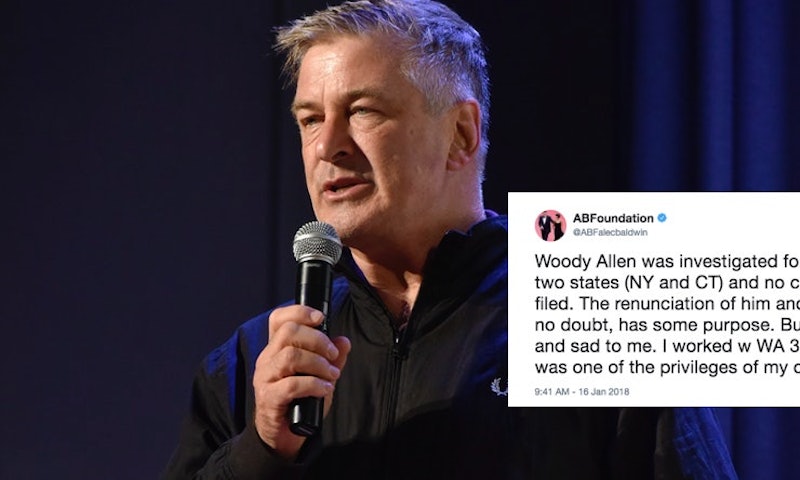 In wake of the #MeToo movement, Woody Allen's daughter Dylan Farrow revisited her sexual assault allegations against him in a Los Angeles Times op-ed published on Dec. 7. (Allen has repeatedly denied these allegations.) In the last few weeks and months, actors including Ellen Page, Greta Gerwig, and Rebecca Hall have denounced the 82-year-old director and expressed regret over working with him. On Jan. 15, Alec Baldwin came to Allen's defense, calling the events "unfair" and saying that working with the director is one of the "privileges" of his career. Fans have mixed reactions — most of which are of disappointment. (Bustle reached out to Baldwin about the backlash, but his rep declined to comment.)

As a refresher, in her op-ed, Farrow claimed, "When I was 7 years old, Woody Allen led me into an attic, away from the babysitters who had been instructed never to leave me alone with him. He then sexually assaulted me." She also wrote that she had been recounting her story to authorities for about 20 years. (According to the LA Times, Allen declined to comment; though, he has previously denied these claims.)

"Woody Allen was investigated forensically by two states (NY and CT) and no charges were filed. The renunciation of him and his work, no doubt, has some purpose. But it’s unfair and sad to me. I worked w WA 3 times and it was one of the privileges of my career."

He later followed up his statement with a second tweet:

"Is it possible to support survivors of pedophilia and sexual assault/abuse and also believe that WA is innocent?I think so. The intention is not to dismiss or ignore such complaints. But accusing ppl of such crimes should be treated carefully. On behalf of the victims, as well."

Farrow, who is Allen's adopted daughter with ex-partner Mia Farrow, further detailed her alleged experience. "Allen’s pattern of inappropriate behavior — putting his thumb in my mouth, climbing into bed with me in his underwear, constant grooming and touching — was witnessed by friends and family members," she wrote in the op-ed. "At the time of the alleged assault, he was in therapy for his conduct towards me."

While Allen denied the claims, a Connecticut prosecutor said he had "probable cause" to file charges in 1993, according to the Los Angeles Times, but declined to protect the "child victim." The op-ed states that Farrow’s allegations have been investigated by sex-abuse experts at Yale-New Haven Hospital, but no evidence of abuse was found.

In her piece, Farrow also addresses her brother Moses, who's spoken out about the situation. Moses was adopted from Korea by Farrow in 1980, and later by Allen in 1991. "Moses now claims that my mother 'brainwashed' him and 'coached' me to accuse Allen, contradicting many years of testimony," Farrow wrote. In 2014, Moses defended Woody Allen and told People, "Of course Woody did not molest my sister... She never hid from him until our mother succeeded in creating the atmosphere of fear and hate towards him.”

In addition to his own tweets regarding Allen, Baldwin also retweeted stories about Moses, such as these:

Fans have since offered their two cents on Twitter, directly replying to Baldwin and his comments.

Others expressed that they believed Allen crossed a line when marrying his adopted daughter Soon Yi in 1997.

In her op-ed, Farrow also called out apparent hypocrisy among stars like Blake Lively, Kate Winslet, and Greta Gerwig, who would openly condemn Harvey Weinstein but wouldn't speak to Allen, who they'd worked with.

Eventually, Gerwig spoke out against Allen, telling The New York Times, "If I had known then what I know now, I would not have acted in the film. I have not worked for him again, and I will not work for him again." Others like Mira Sorvino (Mighty Aphrodite), David Krumholtz (Wonder Wheel), and Timothée Chalamet (A Rainy Day in New York) have condemned the director as well. Before Farrow's piece was even published, Ellen Page wrote a lengthy Facebook post on sexual assault and said, working with Allen was "the biggest regret of [her] career."

In October, Allen called Weinstein a "sad, sick man," though he has yet to respond to celebrity outrage against him now. (Through a spokesperson, Weinstein previously denied all allegations of non-consensual sex.)