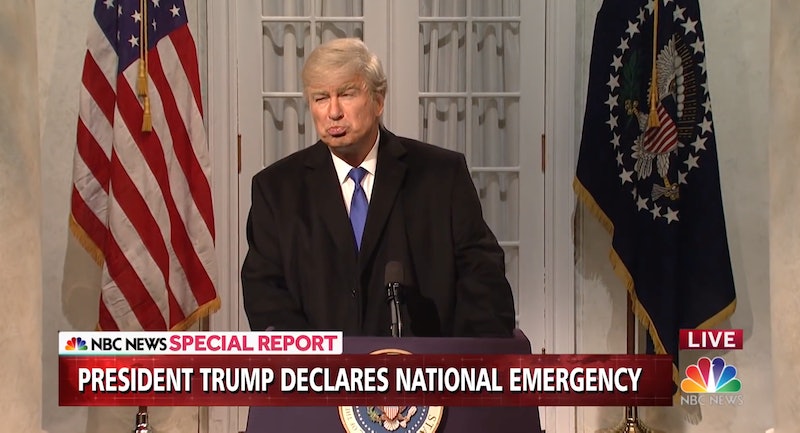 Returning to play his recurring parody of President Trump, Alec Baldwin mocked Trump's national emergency on Saturday Night Live — and the president was not happy. In a cold open for the weekly sketch comedy show, Baldwin walked out to a podium with the presidential seal, sporting an exaggerated take on Trump's duck face. "I'm here to declare a very urgent, important national emergency. This is a big one so I don't want to waste any time," Baldwin's Trump said, according to NBC News.

Baldwin's Trump then said he's faking it all. "You can all see why I gotta fake this national emergency, right? I have to because I want to," he said, according to video of the sketch. "It's really simple. We have a problem: Drugs are coming through this country through no wall."

Trump responded early Sunday morning on his favorite medium. "Nothing funny about tired Saturday Night Live on Fake News NBC! Question is, how do the Networks get away with these total Republican hit jobs without retribution? Likewise for many other shows?" Trump tweeted.

"Very unfair and should be looked into. This is the real Collusion!" the president added.

Trump's news conference from the White House Rose Garden on Sunday was more than 30 minutes long, according to USA Today. "I could do the wall over a longer period of time. I didn't need to do this," Trump said at the press conference. "But I'd rather do it much faster."

Then Trump signed the emergency proclamation.

Baldwin's Trump said it's likely the proclamation will be challenged in court. "So I'm gonna sign these papers for emergency, then I'll immediately be sued. And the ruling will not go in my favor, and then end up in the Supreme Court," Baldwin's Trump said, according to video of the sketch. "And then I'll call my buddy (Brett) Kavanaugh, and I'll say, 'It's time to repay the Donny,' and he'll say, 'New phone, who dis?'"

Minutes after his first tweet, Trump tweeted in all caps. "THE RIGGED AND CORRUPT MEDIA IS THE ENEMY OF THE PEOPLE!" he wrote on Sunday morning.

The sketch also parodied Trump's question and answer session during the Rose Garden announcement. Baldwin's Trump wouldn't call on NBC, the network that airs Saturday Night Live. "NBC's got their hand up, but they suck so not them. ABC sucks too, but at least they have Agents of S.H.I.E.L.D. ... so I'll start with you."

Baldwin's Trump took questions from ABC News, "a girl one," and Playboy, before moving on to CNN's Jim Acosta, who was played by Kyle Mooney, according to NBC News. Mooney's Acosta pointed out that undocumented people commit less crime than American citizens.

Before welcoming the show to New York City, Baldwin's Trump concluded: "In conclusion, this is a total emergency, a five-alarm blaze, which means I gotta go to Mar-a-Lago so I can play some golf."