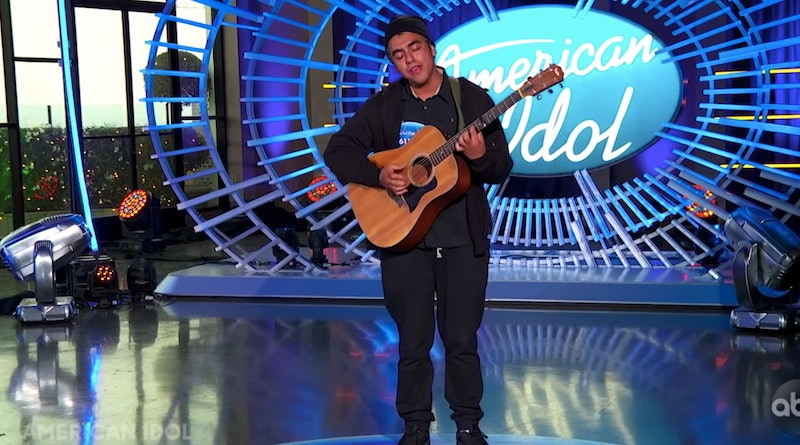 Move over, John Mayer, because Alejandro Aranda from American Idol may be America's newest acoustic heartthrob. As shown in a sneak peek for the March 6 episode, the singer blew the judges away during his audition with an original song. And although it was an impressive sample of his work, it doesn't even scrape the surface of his potential. One scan of his Instagram page reveals that his talent far exceeds a spot on American Idol, and according to his bio for the show, he's only been making music for four years.

His Instagram only dates back to Feb. 21, but it boasts a number of videos that display how talented he is. To watch his fingers rapidly pick the acoustic guitar like a choreographed dance is mesmerizing, and that's not all — he can move at the same pace on the piano, and he also produces his own mini-music videos.

Aranda is a 24-year-old dishwasher from Pomona, California. His audition is reminiscent of fellow young singer-songwriter Catie Turner; a timid and humble approach to absolutely blowing the judge's socks off with an original song. Turner finished last season in the final seven, and Aranda has the potential to go even further. He performed his song called "Out Loud," which is streamable on Spotify.

"You my friend, are so talented," Lionel Richie said, raising to his feet in applause. "I am so inspired." Luke Bryan chimed in. "I just feel like I'm in the presence of greatness. I'm so glad you are here," he said. "It was like watching my favorite movie that I did not want to end." And then Katy Perry joined in on the praise. "I think you're really special," she said. "I think you're an absolute genius."

Aranda remained pretty speechless while the judges showered him with compliments. "I don't even wanna see anybody after him," Bryan said. Perry agreed: "I quit."

"You have such a career," Richie added. "And the fact that you don't know it makes it even more special. There's nothing like you my friend." Richie was definitely right about that.

At first strum, Aranda completely got lost in his music. The emotion behind his performance is impossible to ignore, even buffered through a screen. His airy falsetto is raw but pure at the same time. "I will not sleep until I watch him perform again," Bryan said.

According to The Sundial, the California State University student newspaper, Five of Five Entertainment, and CSU awarded him with the title of Artist of the Year in 2017. At the time, his musical pseudonym was ScaryPoolParty, and that remains his Instagram handle and Spotify name. According to the paper, Aranda decided to become a musician after attending a party, and his biggest inspirations are John Martyn, Nine Inch Nails, and Dead Can Dance. The paper also reported that he started playing music on the street as a way to vent and express himself, not necessarily to perform. But then he noticed the reaction his music elicited from onlookers.

"The amount of energy in the room was beyond amazing," Aranda told the paper. "It made me happy to know how music can change people." He continued, "I just hope I gain more passion from music. I hope to keep growing and learning until I get old."

Aranda is a jack of all trades when it comes to his art form. And whether or not he wins American Idol, he definitely has a future in the music business.