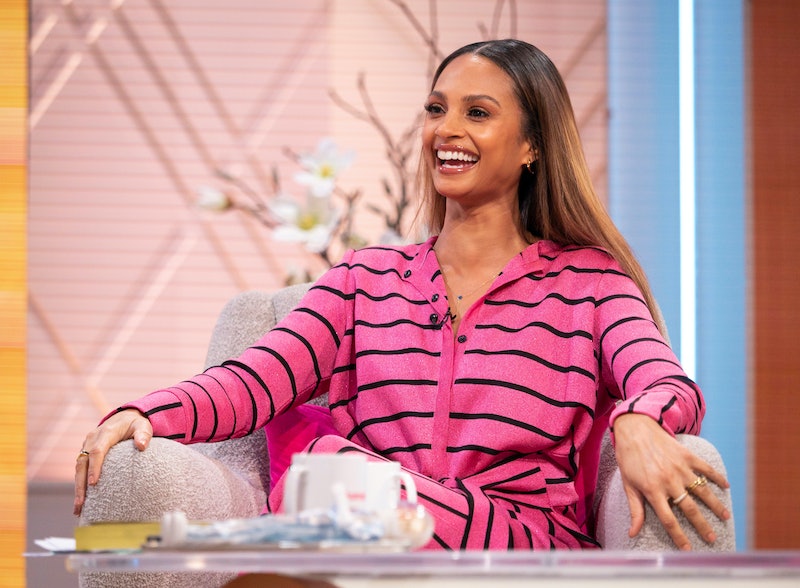 You might already be aware that Alesha Dixon is pregnant and expecting baby number two with her partner Azuka Ononye. I mean who could forget Ant and Dec announcing Dixon's pregnancy on Britain's Got Talent as she took to the stage with with her bump? It was seriously epic. And it seems like things have been just as joyful for the musician and TV personality ever since. Well if the powerful post Alesha Dixon shared about her pregnancy is anything to go by, that is.

On Sunday afternoon, Dixon uploaded a photo to Instagram in which she could be seen smiling on a swing in a bikini. She captioned the carefree snap: "I have a lot to smile about lately! No makeup, no filters, just me and baby ♥." Dixon is clearly radiant in the picture, and credited her partner Ononye (cute!) for the pic.

While perhaps this might seem like just a simple picture of woman with a bump, it's actually really refreshing to see someone in the public eye, with such a large platform (Dixon has over 800,000 followers) celebrating her body during pregnancy. Dixon looks so happy and comfortable in herself, at a time when women, especially those in the public eye, can face added scrutiny and body-shaming from commentators and social media trolls.

Despite the fact that the body is working a literal miracle by growing an entire human, sometimes the world is more interested in where a pregnant woman places her hands. See the backlash Meghan Markle faced for "too much" (according to some parts of the media and internet, anyway) bump-cupping, for a truly disheartening example.

However, despite her current positive outlook, Dixon told the Mirror her journey to celebrating her body hasn't been completely straightforward. She explained: "the great thing about getting older is you just care less. I’m the most comfortable I’ve ever been. It’s so interesting how people fear getting older. I turned 40 last October. I can honestly say I much prefer my body now to when I was in my 20s." She continued, "after I had my daughter, I went through a phase where I was like, ‘Where have the boobs gone?’ Everything had changed. I breastfed for a year and it took me a good year for my boobs to have any kind of curve on them. They just disappeared. I’ve still got stretch marks. But I love how incredible the body is — it can repair and heal itself so beautifully."

And Dixon hopes her positive relationship to her body will empower at least one other person — her five year old daughter Azura. "I hope I can raise Azura to be comfortable in her skin, to accept who she is," she told The Mirror.

It's not the first time Dixon's opened up about her parenting experiences, as Hello! reports. During an episode of her podcast Wear It's At, she said: "I was the last of my friends to have a baby. I sort of felt alone doing it when I did have mine, as all of my friends’ kids were then grown up."

Whether it's body image while pregnant or parenting worries, Dixon's ability to talk openly about tricky topics is so inspiring. The photo that Dixon uploaded might seem like a small step. But anything that helps move towards a world that doesn't shame women's bodies is progress. So thank you, Alesha, for leading by seriously empowering example.