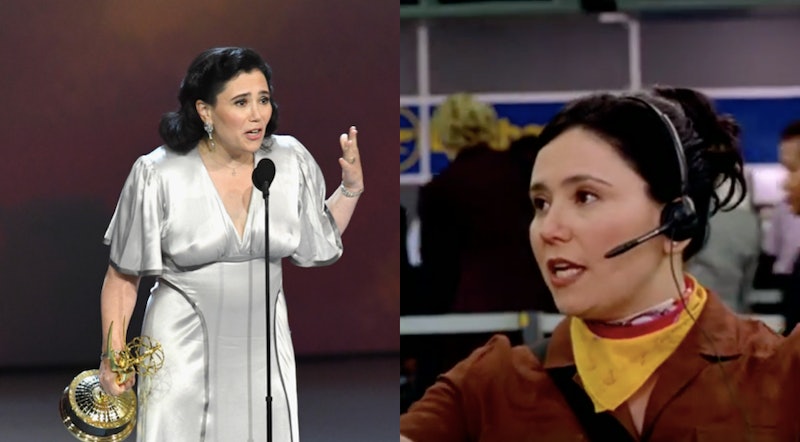 Alex Borstein makes a career these days stealing scenes as Midge's agent in Amazon's The Marvelous Mrs. Maisel, but there are still plenty of fans who remember her from another iconic role. When Alex Borstein won the Emmy for her role in Mrs. Maisel, Twitter immediately exploded with nostalgia for Miss Ungermeyer, a.k.a. the sassy chaperone Borstein played in The Lizzie McGuire Movie.

If you don’t remember Ungermeyer, did you even have a childhood? Borstein flawlessly portrayed the ultra-organized and super strict teacher who was tasked with making sure Lizzie and her friends didn’t get into too much trouble as they traipsed through Rome on a school trip. She was unsuccessful in the 2003 film, as we all know now, since Lizzie managed to live a brief double life as an Italian pop star and romance a Roman dream boat.

But it was a role, and a film, and a TV show, that helped shape many of our childhoods. Plenty of people who are now Mrs. Maisel fans are the perfect age to have also grown up with Lizzie McGuire, and Ungermeyer is a role that they'll continue to remember as they celebrate Borstein's continued success in film and TV. Just take a look at Twitter moments after Borstein won the Emmy for Best Supporting Actress in a Comedy Series:

Borstein of course wasn't actually winning for her role as Ungermeyer, no matter how much she might have lodged herself in our hearts as that character. She nabbed the award for playing Susie, the cantankerous but lovable comedy manager who helps 1950s housewife Midge come into her own as a stand-up comic in The Marvelous Mrs. Maisel, and it was well-deserved.

In an interview with the Los Angeles Times, Borstein spoke about why she was first attracted to the role of Susie, and it's clear what Susie means to her. "I liked that it was a woman who was not a mother, who was not a spouse, who was not whining about trying to find somebody, who was not just being a sidekick to a hot chick who's trying to find somebody," Borstein said. "It passed the Borstein test, which is similar to the Bechdel test. I have kids. I don't want to do that on television. I don't want to play a mom and have that life exposed there. I want this — just an interesting, well-rounded woman who's on her own figuring herself out."

She also said in an interview with Vulture that she loves that Susie, and Midge, aren't afraid to go against the grain in a time when women were so pigeonholed into certain roles. "Women are much more fearful of saying no to anything, in work and in life. Women are afraid to not appease and not be a pleaser," Borstein said. "Midge and Susie are so interesting and so fun to play because they’re both women learning to say no and learning not to appease and decide, 'What do I want? How do I want my future to look?'"

Mrs. Maisel has only aired for one season, and the response has been amazing, so there's much more Susie to come from Borstein. It certainly might not be the only Emmy she sees come from the show, and fans will be excited to watch where she goes from here.

More like this
The First Trailer For 'That '90s Show' Includes So Many Nods To The Original Series
By Jack Irvin, Alyssa Lapid and Grace Wehniainen
These 'Criminal Minds' Throwback Photos Show The Cast’s 17-Year Evolution
By Grace Wehniainen
The 'Ugly Betty' Cast Just Reunited In The Best Way
By Sam Ramsden
How The Thanksgiving Episode Of 'Gossip Girl' Changed Pop Culture History
By Gabrielle Bondi
Get Even More From Bustle — Sign Up For The Newsletter