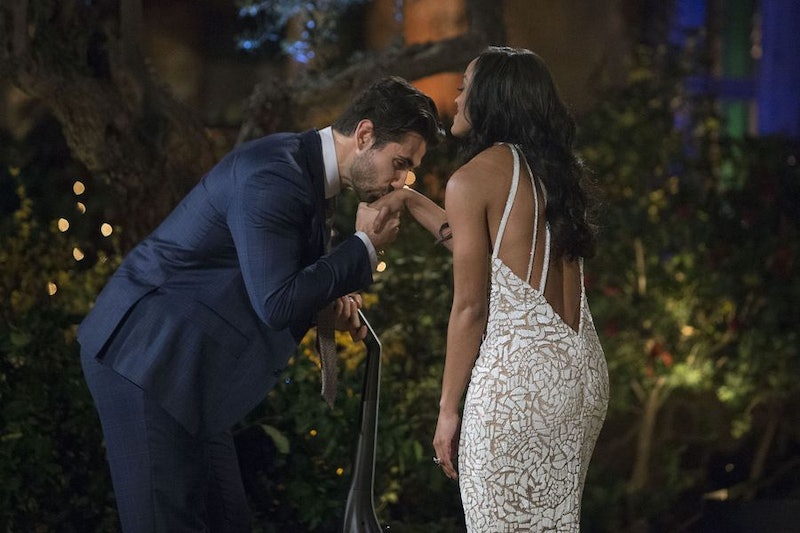 It's still early on The Bachelorette, but Rachel's already making some connections with a few of her contestants... and on Monday night's episode, it became pretty clear she's feeling it with a certain someone. Rachel gave Alex the group date rose on The Bachelorette, and it could be a sign that they're about to get a lot closer. The chemistry between them practically jumps off the screen — and this is before they've even had the chance to go on a one-on-one.

But to be fair, even though Alex got the date rose, every guy was a winner that day (except for maybe poor, sweet Fred, who got sent home mid-date) because they all got to meet Ellen DeGeneres. And after all that fun, Alex seemed a little concerned that he hadn't made an impression on Rachel, but he totally had, because that rose was all his. And being that Rachel's been a bit selective about her lip locks so far, it means a lot that they smooched... and it definitely seemed to be a defining moment for them both.

Next, all Alex has to do is lock in some one-on-one time with Rachel, and he's got the potential to be some tough competition for the other men.

However, since I have eyes, I can tell you that Alex is an attractive man, so I can't blame Rachel for being totally into him. They don't know each other too well yet, but there's plenty of time for that coming up. Besides, it's not like he's the only guy she's into so far, either. She's made similar connections with guys like Bryan and Peter, so I guess we'll just have to wait and see.

I'm loving Rachel's attitude toward the process, though, so I'm excited to see where this relationship goes. Hopefully, now that she's narrowed the pool down a bit, things will be getting more serious soon. Before you know it, it'll be time for that final rose... and Alex could have a good chance at snagging it.