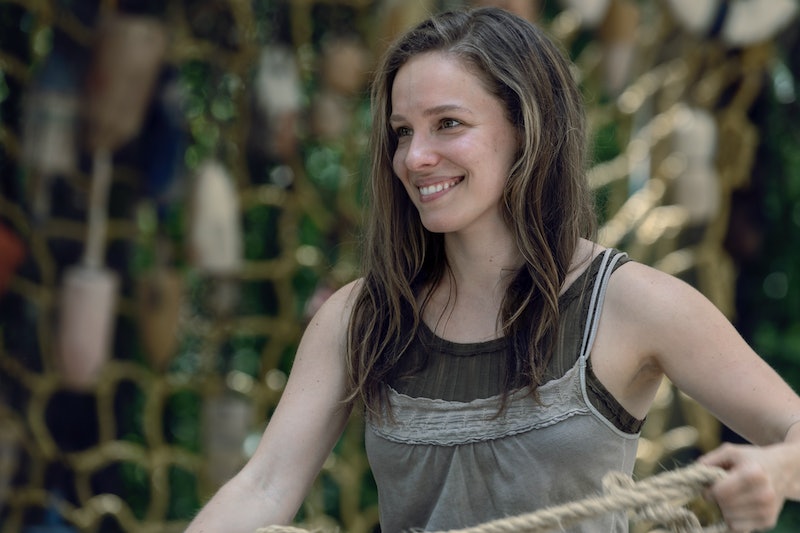 So much has happened on The Walking Dead over the course of nine seasons that the AMC series had little choice but to grow far beyond its its comic book roots. Season 10 will be no different, as the show is introducing a new series regular, Jules, a citizen of Oceanside. We don't know much about her or how she'll play into the events this season just yet, but we do know a little about Alex Sgambati, who plays Jules on The Walking Dead.

According to her IMDB page, Sgambati, who was raised in Raleigh, North Carolina, got her professional break when she was scouted by Craig Ferguson during a taping of The Late Late Show with Craig Ferguson in 2011. The host invited her to be a recurring personality on the show and her career grew from there.

Since then, Sgambati has gone on to book guest roles on many TV series including One Tree Hill, Make It or Break It, Sleepy Hollow, and Nashville, just to name a few. In 2017, she even appeared in Ed Sheeran's "Kiss Me" video short. Announcing her new role on The Walking Dead via Instagram on September 17, Sgambati admitted that she's "so excited" to be joining the cast this season, and it's easy to see why.

The Walking Dead is in the middle of a pretty major crisis with the impending Whisperer war, leaving the fate of the survivors very much up in the air.

As showrunner Angela Kang teased in an interview with TV Insider, "When we come into the season, we'll see that a lot has happened since the winter storm episode. There’s paranoia gripping the communities and conflict over how to handle the threats [the Whisperers] pose. You’ll see people who are doing better than others, and you’ll see others who are really struggling."

This is partly what makes the addition of Jules so interesting to fans —while the photo AMC has released of Sgambati in character doesn't tell us too much about her personality, given that the Whisperer war is coming, it might not be a massive leap to think that she could be hiding something. After all, as The Walking Dead has proven over the years, you can never judge on appearances.

Pretty much nothing is known about the character of Jules at all at this point, and since she didn't exist in the comics, we can't even venture a guess at exactly what she'll be like. It's also unclear how long Jules —and, by extension, Sgambati — will be sticking around this season, especially since we don't even know how much longer The Walking Dead will be continuing beyond Season 10. As Kang told Variety, "Depending at the pace we go, it could be very fast at the end or it could be very slow. We always fill in with original material."

When The Walking Dead returns to AMC on Sunday, Oct. 7, there are plenty of questions the series still needs to answer. The addition of Jules adds an extra element of intrigue since it will be fun to see how she fits in with the other survivors and what her role in the Whisperer war will be.

More like this
Netflix Shut Down 'Bridgerton' S3 Rumours About A “Very Dark” Storyline
By Bustle
This 'Gossip Girl' Wardrobe Error Has Gone Viral On TikTok
By Alyssa Lapid
'The Last Of Us' Has Officially Been Renewed For Season 2
By Darshita Goyal
Every 'That '70s Show' Character Who Returned For The Netflix Spinoff
By Grace Wehniainen
Get Even More From Bustle — Sign Up For The Newsletter
From hair trends to relationship advice, our daily newsletter has everything you need to sound like a person who’s on TikTok, even if you aren’t.