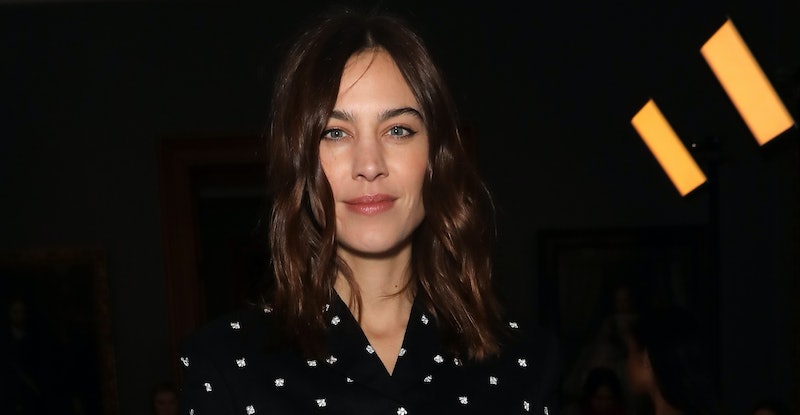 March is Endometriosis Awareness Month and it isn’t just charities that are raising awareness of the condition, celebrities are also putting their name to the cause. Alexa Chung has shared her experience with endometriosis and why Endometriosis Awareness Month is so important in a post on Instagram. She reposted a picture from All On The Board which featured stats and information about how many people are affected by the disease. The image was accompanied by a caption in which she opened up about the surgery she had to help manage her endometriosis. Chung wrote, “why don’t they know what it is? Why don’t they know how to cure it? Could it be to do with a gender healthcare bias? Also probably doesn’t help that “endometriosis” is the longest and most boring word to read.”

As the BBC reports, endometriosis is a condition where a substance similar to the lining of the uterus grows outside of it. Like the womb lining it bleeds and builds up every month, but has nowhere to go which can lead to inflammation, pain, and scar tissue build-up. Alongside painful periods and general pelvic pain, symptoms can also include heavy periods and painful bowel and bladder movements, per the NHS website. The illness is difficult to diagnose and treat, with lesions not always showing up on initial scans, per the charity Endometriosis UK. A type of surgery called laparoscopy is considered the most definitive way to diagnose the condition. This procedure often involves making small incisions in the abdomen to remove endometriosis lesions.

New research from Endometriosis UK has revealed that despite endometriosis affecting 1.5 million people in the UK, 54 percent of people do not know what endometriosis is. Like Chung, the charity has called for more education around the condition. Hopefully this awareness month will help to bring that about.

More like this
Pret & Costa’s Coffee Is The Strongest On The High Street, According To Which?
By Sam Ramsden
Here’s What TikTok's "Mascara” Trend Is *Really* About
By El Hunt
Ben & Jerry’s New Sundae Flavours Are A Chocoholic’s Dream
By Sophie McEvoy
25 Inspiring Quotes From Black Women To Celebrate Black History Month
By Kyli Rodriguez-Cayro and JR Thorpe
Get The Very Best Of Bustle/UK
Sign up for Bustle UK's twice-weekly newsletter, featuring the latest must-watch TV, moving personal stories, and expert advice on the hottest viral buys.