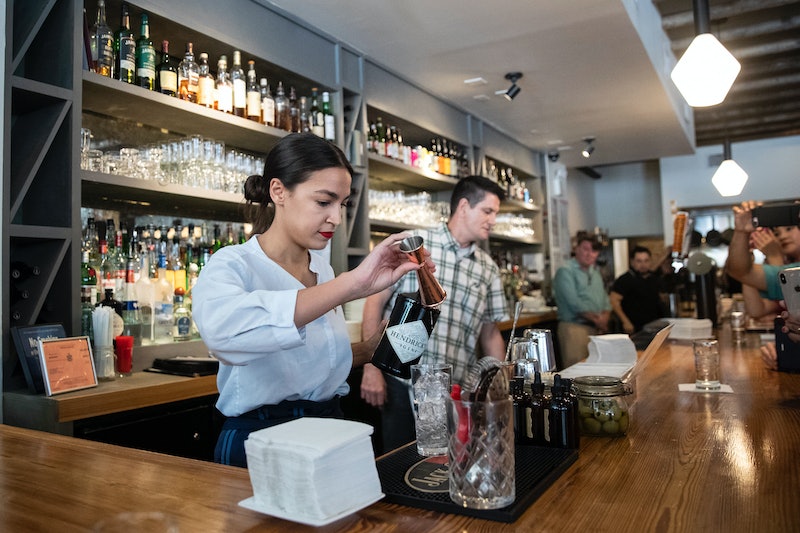 It was a busy Friday night when Rep. Alexandria Ocasio-Cortez left the halls of Congress behind and stepped back, temporarily, into the job she's long claimed helped foster her progressive political ideas. The freshman congresswoman returned to her bartending roots in an effort to raise awareness and support for raising the federal minimum wage for all workers to $15. And videos of Ocasio-Cortez bartending show she's still got what it takes to make a mean martini.

"I was nervous that I may have lost my touch," the congresswoman wrote in a tweet posted to her official account Friday. "Still got it! That muscle memory doesn't quit."

Ocasio-Cortez, who, according to The Guardian worked 18-hour shifts as a bartender and waitress before being elected to Congress in 2018, returned to her old job Friday. The New York representative slung drinks and plates in Jackson Heights, Queens, at an advocacy event organized by Restaurant Opportunities Center United, a group fighting for a raised minimum wage.

"Any job that pays $2.13 an hour is not a job, it's indentured servitude," Ocasio-Cortez said, per Vox, referencing the current federal minimum wage for tipped workers. "All labor has dignity. And the way that we give labor dignity is by paying people the respect and the value that they are worth at minimum. We have to make one fair wage and we have to raise the national minimum wage to $15 an hour, nothing less."

Tipped employees are defined by the U.S. Department of Labor as anyone who works in an occupation where they regularly receive more than $30 in tips a month. According to the Department of Labor, only seven states currently require employers to pay tipped employees (on top of whatever tips they receive) an hourly wage that is equal to or above the state's minimum wage on top of whatever tips they receive. Another 26 states, plus Washington D.C., have laws mandating employers pay tipped employees an hourly wage that's higher than the $2.13 currently required under the federal Fair Labor Standards Act while in 17 other states, tipped workers are required to be paid only $2.13 an hour.

On Friday, Ocasio-Cortez said it was important to establish a fair federal minimum wage for all workers, including tipped employees, so as to protect them from harassment in the workplace and the rising cost of living. "When our rents are running away, when our food costs are running away, in dense cities like New York, Chicago, San Francisco, we need to make sure that people are paid enough to live, period," she said, per Vox.

The congresswoman reportedly went on to discuss how tipped workers may feel more pressured to put up with harassment due to their heavy reliance on tips to pay bills. "I remember working in restaurants, and, you know, you would have someone say something extremely inappropriate to you, or you'd have someone touch you, and the thing is it would be the 28th of the month, the 29th of the month," she said. "The first of the next month was rolling right around and you have a rent check to pay. And so you are more likely to stand up for yourself and to reject sexual harassment on the 15th of the month, or maybe the 10th of the month, when you could pick up an extra shift to make up for telling that guy to go buzz off."

According to The New York Times, Ocasio-Cortez has co-sponsored a House bill that, if passed, would bring minimum wage to $15 an hour by 2024.