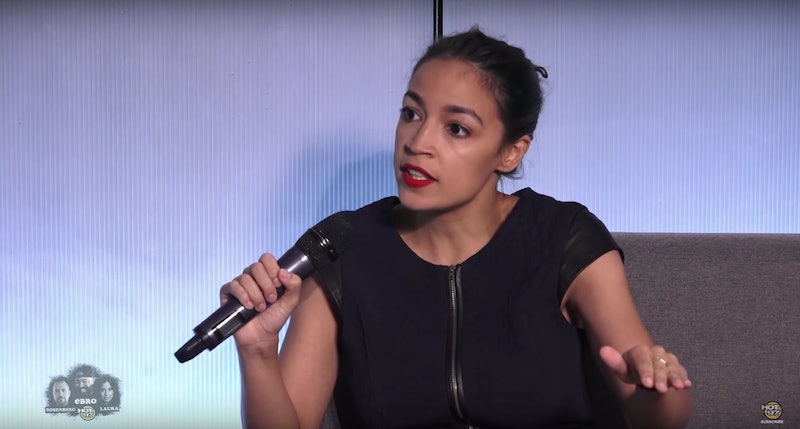 It's the first time in recent memory that an incumbent Democrat has lost the bid for renomination, and perhaps, even more significant because of the woman behind the upset. On Tuesday night, 28-year-old activist Alexandria Ocasio-Cortez beat Joe Crowley in New York's House primary. Ocasio-Cortez is a progressive and ran on a campaign platform that included abolishing Immigration and Customs Enforcement (ICE) and making Medicare universal for all Americans.

"This is not an end, this is the beginning. This is the beginning because the message that we sent the world tonight is that it's not OK to put donors before your community," Ocasio-Cortez told roaring supporters on Tuesday night, according to CNN.

Ocasio-Cortez's upset is remarkable; she defeated a man with a high public profile who was likely to become the next Speaker of the House. During her campaign, she argued that the district she would come to represent had an incumbent who was a political machine. More specifically, Ocasio-Cortez claimed that Crowley had become too removed from the community, which was growing in its minority demographic, The Washington Post reported.

Elected in 1998, Crowley was the fourth-ranking Democrat in the House, according to The Washington Post, and had established his political identity and stature inside the Democratic party. He was one of the first to endorse the universal Medicare bill, and he participated in protests against Trump's travel ban and hardline immigration. He had a clean public persona and was free of controversies in his personal life.

But the race must not have been clear-cut for Crowley. He spent $1.5 million in his first primary since 2004, compared to Ocasio-Cortez's war wallet of $300,709, according to The Washington Post. Ocasio-Cortez's funds came from small donations and stayed small because of her reported refusal to accept corporate PAC funds.

In Ocasio-Cortez's campaign ad, found on YouTube, she describes herself as the daughter of a working-class Puerto-Rican mother and a South Bronx father before digging into Crowley, who has represented the district for the past 20 years.

"It's time we acknowledge that not all Democrats are the same," Ocasio-Cortez says in a voiceover. "That a Democrat who takes corporate money, profits off foreclosure, doesn't live here, doesn't send his kids to our schools, doesn't drink our water or breathe our air, cannot possibly represent us."

"Women like me aren't supposed to run for office," Ocasio-Cortez says, of her blue-collar background in the ad. "I wasn't born to a wealthy or powerful family. I was born in a place where your zip code determines your destiny." That zip code has certainly informed her platform, which prioritizes free tuition, affordable housing, and a $15 minimum wage.

A 2011 graduate of Boston University, Ocasio-Cortez has a range of experience with community work. According to Elite Daily, the native Bronxite has organized for Bernie Sanders, worked on economic policy, and shaped young minds as the educational director for high school students. Oh, and just in November, she was making a living slinging beers, per Washington Post reporter Jeff Stein.

Ocasio-Cortez has the potential to become the youngest person ever in the House of Representatives. Currently, the average age of a House member is around 58 years old. It's precisely this fact that spurred Ocasio-Cortez into action. "We need an entire generation to start taking up these seats," she said to Elite Daily.

But perhaps it was her dedication that truly vaulted her to the primary win. Ocasio-Cortez reinvested her efforts into potential change for the community. "I started my campaign out of a Trader Joe's bag with a bunch of printed palm cards and an idea," Ocasio-Cortez told Elite Daily. "I did that for five months."

Those post-work months of canvassing paid off. Ocasio-Cortez now looks ahead to the general election in November.