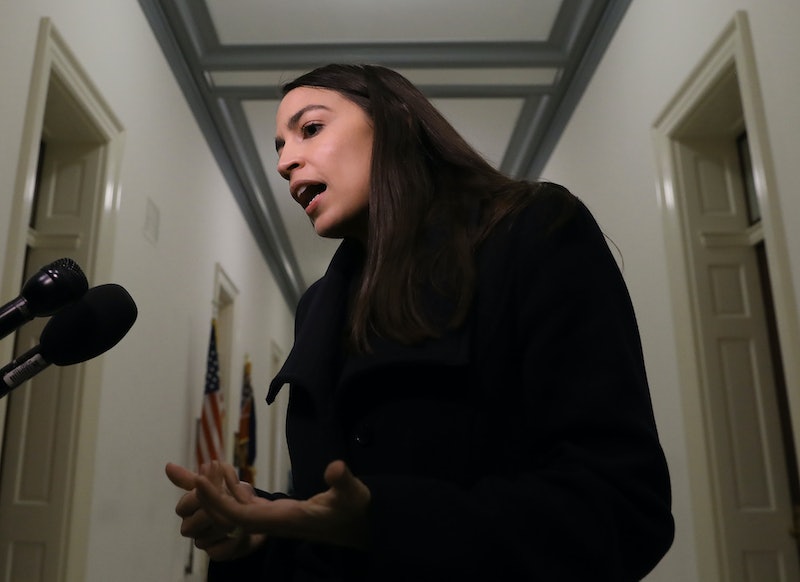 On Tuesday, during a congressional hearing, Alexandria Ocasio-Cortez explained credit reporting companies use consumer data to make money — sometimes even without your consent. Throughout the hearing, a number of experts appeared before the panel to explain what credit scores actually mean, and how credit companies use them at the expense of consumer privacy. Ocasio-Cortez spoke with those experts about the issue— and the conclusions they came to were a little alarming.

During the hearing on credit bureaus, Ocasio-Cortez and other lawmakers spoke with a number of experts. These included Jennifer Brown of UnidosUS, an organization which describes itself as a "nonpartisan voice for Latinos," and Chi Chi Wu of the National Consumer Law Center.

At one point, in a video posted to Twitter by the coalition Americans for Financial Reform (which can be seen below), Wu explained that a credit score was initially created for a singular goal: to predict the likelihood that a person would be 90 days late for a two-year payment period. But when Ocasio-Cortez asked the experts if they believed that the current structure was set up to prioritize this goal, Brown offered up a resounding no.

"Absolutely not," Brown said. "You can see it especially in the housing/rental market...[with the Big Three] selling all of your rental information, packaged with your credit history, in order to determine whether or not you're a 'good renter.'"

Ocasio-Cortez then summarized the testimonies by explaining that credit bureaus work to make money off of consumer data.

So they aren't as incentivized to come up with the most accurate 90-day predictor possible, they are incentivized to sell data, and to collect as much data about each and every single American...and especially when consumers don't even get to opt in or choose or offer consent as to what data is being collected, we have an oligopoly of three major corporations that are trying to collect as much data as possible without consumer consent.

This isn't the first time Ocasio-Cortez has taken on credit bureaus — in early February, Ocasio-Cortez called out the flaws of credit scoring in her Twitter, and also seemed to hint at the need for a hearing just like the one she attended on Tuesday.

The twitter thread started with Ocasio-Cortez acknowledging the unfounded claims circulating through the internet at the time, which accused Ocasio-Cortez of having a number of credit issues.

In response to that tweet, Juice Diem, a Twitch streamer and influencer, wrote, "I had a credit score in the low 400s, because being poor isn't something you can just stop being on a whim. It took decades for me to build out."

Ocasio-Cortez tweeted back at him, "[It's] a good moment to note that in the wake of the Equifax scandal, privatized credit scoring is a dice game & the credit score system is very broken too. If only someone could do a Financial Services hearing about that"

Ocasio-Cortez has established herself as a unique voice in Congress, not just for her age but for her background as someone who has openly struggled with housing, worked for tips, and more. The hearing on Tuesday was indicative of a greater effort being made by Congress to reform the credit reporting industry; you can read more about those efforts in this press release from the House on credit bureau accountability,