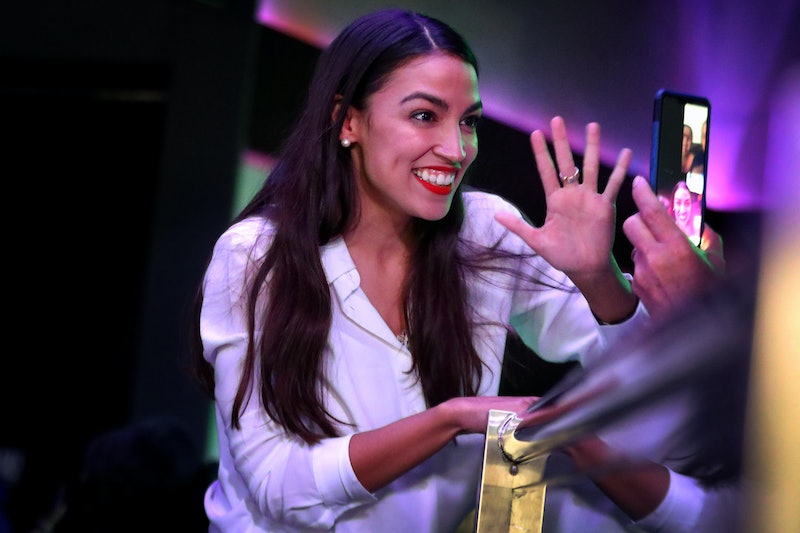 On Sunday, the congresswoman from New York's 14th district took a creative approach to raising money for an important cause. Alexandria Ocasio-Cortez fundraised for transgender kids by joining a video game livestream benefitting Mermaids, an organization that supports transgender youth.

As Mashable described, the Donkey Kong 64 livestream was created by YouTuber Harry Brewis. Brewis launched the livestream on Twitch on Jan. 18, saying that he wanted to finish a game that he had never completed as a child. Brewis described via Mashable why he opted to use the livestream to raise money for Mermaids. "... I find the media discussion surrounding this issue in my country [Britain] ... to be woefully misinformed," Brewis said. "I’d like to do my bit to help support the people who do the hard work of contributing to people’s thinking on an important issue."

Ocasio-Cortez called on others to support the livestream on Twitter on Sunday amidst a discussion thread responding to writer Aaron Sorkin's comments about newly-elected Democrats, like herself, on CNN. Sorkin told CNN's Fareed Zakaria on Sunday that, "They [the Democrats] now need to stop acting like young people." Sorkin also added, "Democrats to be the non-stupid party, to point out the difference ... That it’s not just about transgender bathrooms. That’s a Republican talking point they’re trying to distract you with ..."

In reflecting on Sorkin's comments, Ocasio-Cortez wrote on Twitter,

... Lastly, we wouldn’t need to talk about bathrooms at all if we acted like adults, washed our hands + minded our own business instead of trying to clock others.

She then wrote another tweet in the thread publicizing the livestream, saying, "If you’d like to use this as a good moment to support the queer community, there’s a charity twitch stream going on for @Mermaids_Gender."

The congresswoman called in to the livestream after it had been going on for about 50 hours, PinkNews reported. During her appearance on the livestream, Ocasio-Cortez reflected on why it's so problematic that there aren't federal anti-discrimination protections for transgender individuals, the outlet noted. "It makes these issues much more acute in their crises than they usually are on average for other people," Ocasio-Cortez asserted on the Twitch livestream. "So it's important that we do talk about these issues in the economic frame, but not let go of the fact that that discrimination is a core reason for the economic hardship."

In a lighter moment on the livestream, the congresswoman also discussed her affinity for the Nintendo 64 (N64) gaming system. "I never owned an N64, though I do think it's probably the best system out of all of them," she noted. Ocasio-Cortez also added, "... I used to go to my cousin's house all the time and she had Super Mario 64, Pokemon Snap, and probably a handful of other things."

Many on Twitter responded positively to Ocasio-Cortez's livestream appearance. Some Twitter users particularly commended her for being able to relay her political ideas to a wide range of audiences. For example, journalist Peter Sterne tweeted:

There are 2 things that people really like about @AOC: she has bold, uncompromising political ideas; and she tries to meet people wherever they are (Twitter, Instagram, protests, community meetings, Twitch streams) to talk to people about those ideas.

Ocasio-Cortez's appearance on the Donkey Kong 64 livestream certainly helped draw even further attention to a very noteworthy cause. Mermaids reported early Monday morning that the livestream helped raise over $340,000 to support its work. On Twitter, the organization thanked Brewis, the congresswoman, and others for helping advance its mission.