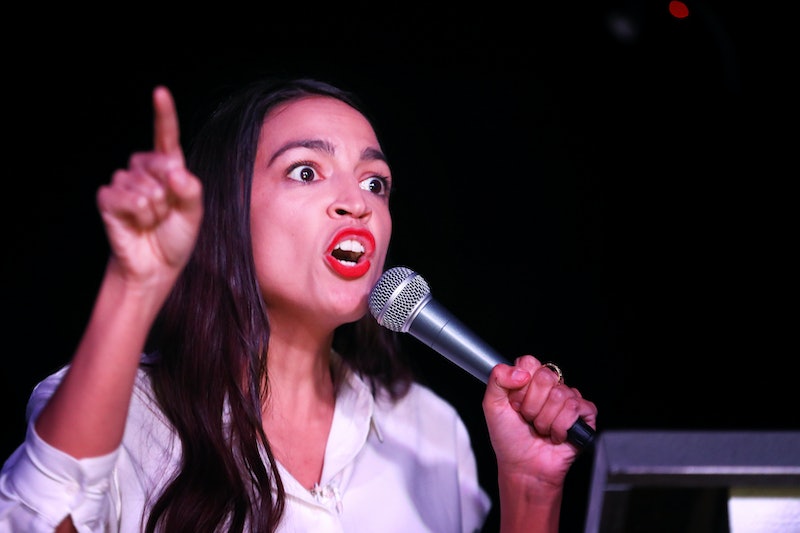 Last week outgoing Democratic Sen. Claire McCaskill celebrated the end of her time in the Senate by taking shots at a number of lawmakers, including Representative-elect Alexandria Ocasio-Cortez. Although a political newcomer, Ocasio-Cortez, a self-described Democratic socialist, has quickly become a well-known name after her surprise defeat of longtime Rep. Joseph Crowley in New York's 14th Congressional District's Democratic primary. Now, Ocasio-Cortez is pushing back on McCaskill for calling her a "thing" and "a bright shiny new object."

"Not sure why fmr Sen. McCaskill keeps going on TV to call me a 'thing' and 'shiny object,' but it's pretty disappointing," Ocasio-Cortez tweeted Saturday.

Last week, McCaskill told CNN that she was "a little confused" as to why Ocasio-Cortez was "the thing." The outgoing Missouri senator went on to say she felt Ocasio-Cortez was "a good example" of the Democratic Party turning its attention from delivering on real issues in ways that would attract independent and white working class voters to focus on "pie-in-the-sky policy ideas." McCaskill went on further to describe Ocasio-Cortez as "a bright shiny new object," saying she "came out of nowhere and surprised people when she beat a very experienced congressman."

On Saturday, Ocasio-Cortez issued her own scathing criticism of McCaskill, who lost her re-election bid to Josh Hawley, Missouri's Republican attorney general, in November. "McCaskill promised she'd '100 percent back Trump up' on his anti-immigrant rhetoric & lost," Ocasio-Cortez tweeted. "In MO, almost all progressive ballot issues won."

The representative-elect then went on to push back on McCaskill's claim that her policy ideas wouldn't resonate with a variety of voters. While visiting Missouri after her primary, Ocasio-Cortez said she knew of "a conservative" who'd embedded at one of her rallies with Ferguson activists and progressive organizers. "You can tell she was inspired + struggled w/ Fox News bc our message resonated."

In a series of tweets published Saturday, Ocasio-Cortez, who is expected to begin her first year as a member of Congress on Jan. 3, also commented on how McCaskill appeared to defend the Republican Party in her interview with CNN last week. "I'm also not sure why McCaskill is covering for the GOP by saying they 'secretly think Trump is nuts,'" she tweeted. "Nobody cares. Trump is melting down our institutions and inciting division between people. At any time GOP could have checked him and choose not to. They're accomplices."

McCaskill had told CNN that the GOP was now "Donald Trump's Republican Party," but alleged that some Republican senators would privately tell you Trump "is nuts." She claimed these Republicans feel the president "doesn't have a grasp of the issues" and was "making rash decisions" and "not listening to people who know the subject matter." The outgoing Democratic senator also claimed that these Republican senators weren't publicly opposing Trump out of a fear of losing the support of their base.

On Sunday, McCaskill appeared to attempt to clarify her remarks in a tweet to Ocasio-Cortez. "In the same interview I said I 'wish you well and hope you hang the moon,'" the outgoing senator wrote. "My point was that results, not rhetoric is what really matters. Most folks are very cynical about all the promises, when they aren't followed by real accomplishments. I look forward to cheering yours!"