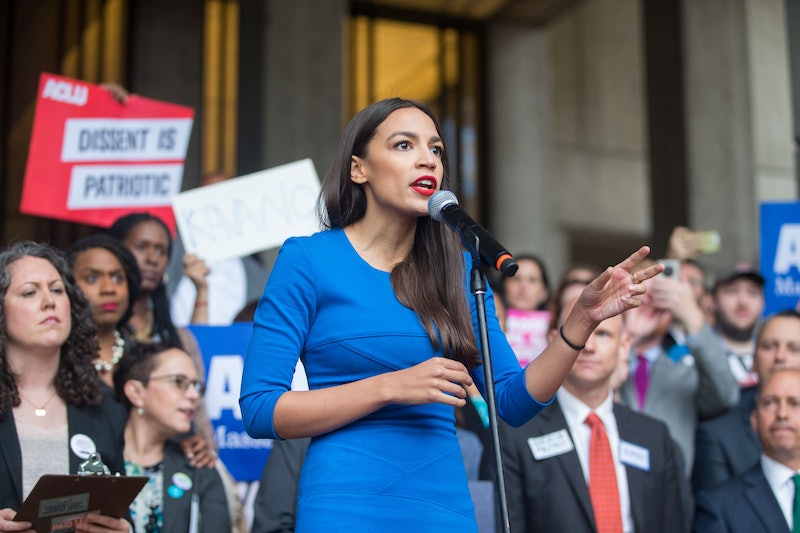 Ever since she won her midterm race back in November, newly-minted New York Rep. Alexandria Ocasio-Cortez has fiercely advocated for a "Green New Deal" to tackle climate change. To finance this deal, Ocasio-Cortez recently proposed an income tax rate of up to 70 percent on the country's wealthiest people. In response to this proposal, a GOP strategist described Ocasio-Cortez as a "little girl" during an appearance on Fox Business Network — and the Democrat from New York did not let his comments slide.

During a Friday night interview with Fox Business Network's "Lou Dobbs Tonight," Republican campaign consultant Ed Rollins — who chairs the pro-Trump Great America PAC — condemned Ocasio-Cortez for her "pre-Reagan economics and 70 percent taxes." He also described 29-year-old Ocasio-Cortez, the youngest woman ever to be elected to Congress, as a "little girl," and suggested that Democratic women would be negatively impacted by using her as the face of their party.

On Saturday morning, Ocasio-Cortez took to Twitter to respond to Rollins' comments, and indicated that she was not fazed by what he had said.

"This dude is a walking argument to tax misogyny at 100%," Ocasio-Cortez tweeted. "Republicans rob everyone the opportunity of real policy debate by resorting to this."

Ocasio-Cortez was not the only newly-elected woman in Congress that Rollins went after. He also argued that Democratic women are making a mistake putting Michigan Rep. Rashida Tlaib "out front with her mouth." On Thursday, shortly after she was sworn in, Tlaib told her supporters that she and her fellow Democrats were going to "impeach the motherf*cker," referring to President Donald Trump. Tlaib's comments sparked outrage from Trump and other Republicans, including Rollins, but she and other progressives have stood by what she said.

"Republican hypocrisy at its finest: saying that Trump admitting to sexual assault on tape is just 'locker room talk,' but scandalizing themselves into faux-outrage when my sis says a curse word in a bar," Ocasio-Cortez tweeted on Saturday. "GOP lost entitlement to policing women’s behavior a long time ago. Next."

Ever since she was elected — and even before that — Ocasio-Cortez has faced a ceaseless stream of criticism from the GOP. Republicans have scrutinized her clothes, questioned her personal history, mocked a video of her dancing back in college, alleged that she lied about where she grew up, booed her when she voted for Nancy Pelosi to be Speaker of the House, and have otherwise made her one of the central focuses of their attacks on the left.

In spite of all this backlash, Ocasio-Cortez has persisted in her advocacy for progressive policies — including the Green New Deal, which ambitiously proposes eliminating fossil fuel use within 12 years. Moreover, she and numerous other freshman officials — such as Tlaib, Minnesota Rep. Ilhan Omar, New Mexico Rep. Deb Haaland, and Massachusetts Rep. Ayanna Pressley — all made history when they were sworn in on Thursday.

Correction: An earlier version of this story misstated the network on which Ed Rollins made his comments. It has been updated.