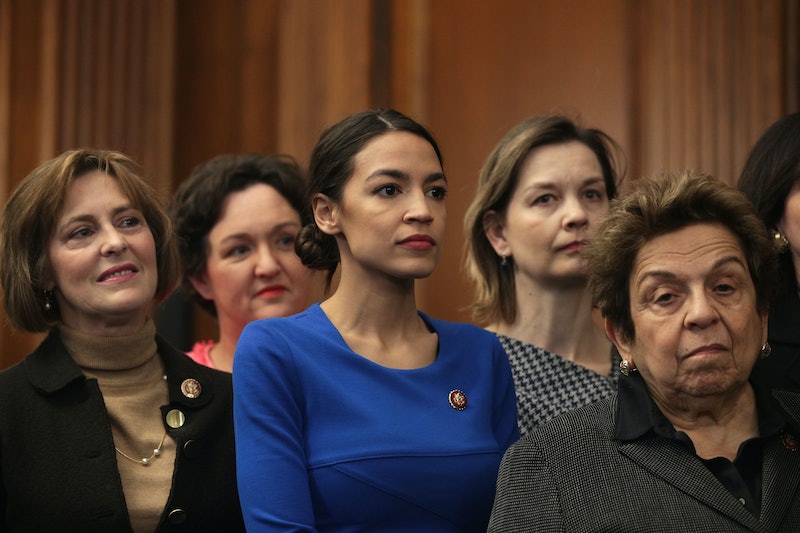 Since taking office, Rep. Alexandria Ocasio-Cortez has found herself to be the subject of numerous rumors and theories. In January, for example, a Facebook user claimed, without evidence, that the freshman congresswoman had a credit score of just 430, had been evicted twice, and seen two checking accounts close. The claim went viral, spreading on various social media platforms as user after user presented it as fact. But rather than stay silent, Ocasio-Cortez is pushing back on these conspiracy theories and blaming Republicans for targeting her.

"The right has gotten increasingly desperate w/spreading targeted rumors about me lately," she tweeted late Friday along with the link to a Snopes article debunking claims of poor credit, multiple evictions, and closed bank accounts. "I had to live alone in my family's apt after my dad died, so the eviction lie is especially bad."

Theories regarding Ocasio-Cortez's financial situation in particular — whether they present her as being secretly wealthy or completely poor — have been used to attempt to discredit the congresswoman's seat on the House Financial Services Committee, according to Snopes. The fact-checking website, however, said it found no evidence of evictions or even irregularities in her rental and housing history when it ran a background check on Ocasio-Cortez. It was also unable to find evidence of shuttered bank accounts or a low credit score.

On Friday, Ocasio-Cortez appeared to suggest Republicans were behind at least some of the conspiracy theories floating around about her. "It's pretty wild that the GOP can't decide whether they're going to run with the conspiracy theory that I'm secretly rich, or the exaggeration & mockery of my family's struggle after my dad died during the financial crisis," she tweeted. "Instead, they decide to defy logic and run with both."

Ocasio-Cortez has previously been quite candid about her finances. In November, for example, she told The New York Times she was struggling to find an affordable apartment in Washington, D.C. Fox News, however, claimed a financial disclosure filed just a few months before showed the congresswoman had reported having $15,000 to $50,000 in a checking account. Later that same month, Ocasio-Cortez's communications director said the congresswoman had been forced to "dip into" her savings since the disclosure was filed and now had "well below $7,000."

"She's had to dip into her savings since that was filed," CNBC reported Corbin Trent, Ocasio-Cortez's director of communications, said. "She's down to well below $7,000 now."

But the congresswoman isn't exactly laughing at the conspiracy theories floating around about her. "This stuff is really sad," she wrote in a separate tweet. "The GOP is so intellectually bankrupt that they no longer engage to debate issues in good faith, but instead seek to lie, distort, name-call, target, & destroy people/communities w any means possible. It's a virus and a race to the bottom."

Ocasio-Cortez defeated Republican Anthony Pappas to become the representative-elect of New York's 14th district after winning a whopping 78 percent of the vote, according to the New York Times. She is the youngest woman ever elected to Congress.