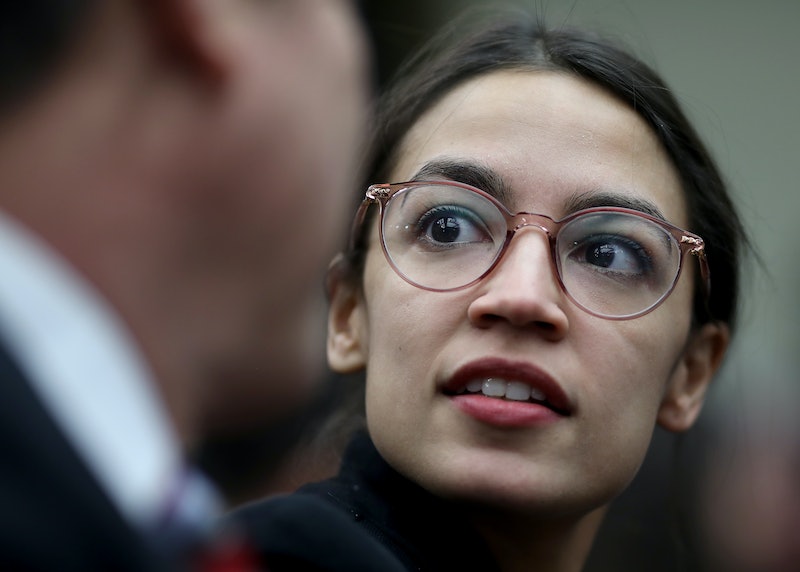 Several news outlets have announced layoffs in recent days, with BuzzFeed joining HuffPost and Gannett in cuts to the newsroom announced on Friday. In response, Rep. Alexandria Ocasio-Cortez spoke out about the media layoffs, saying that if journalism dies, democracy will too. "Healthy democracy *requires* high-quality journalism," she wrote on Twitter Saturday.

"W/o a wide range of independent outlets & the revenue to sustain them, our democracy will continue to crumble," Ocasio-Cortez continued. "We can’t simply accept the cliché that 'journalism is dying.' Journalism will only die if we choose not to fight for it - and if journalism dies, our democracy will, too."

Ocasio-Cortez blamed "tech monopolies" and "concentration of ownership" for the recent difficulties in the industry. With regards to tech companies, she said that platforms like Facebook "currently have 0 incentive to disseminate high-quality, true information." The monopoly trend, she said, "is societally & economically unsustainable."

The freshman representative from New York City didn't lay out ways to solve all of journalism's problems — or how to find jobs for those laid off. But she did make clear that she valued the sector — a view at odds with President Trump.

The president relished in the layoffs on Twitter Saturday. "'Ax falls quickly at BuzzFeed and Huffpost!' Headline, New York Post," Trump wrote. "Fake News and bad journalism have caused a big downturn. Sadly, many others will follow. The people want the Truth!"

The Huffington Post reported that some 1,000 jobs in total were lost in the month of January. LGBTQ coverage was particularly affected, with cuts at BuzzFeed and the loss of the entire Into newsroom, whose editorial staff was laid off in the middle of the month. All of this bad news comes after a rough end to 2018.

"I think we’re in a scary time," Joel Kaplan, Newhouse School's associate dean for professional graduate studies told AdWeek last week. "We’ll see consolidation and cuts, cuts, cuts, and the next phase will be closures. Disaster is looming; that’s when disaster will hit."

NPR reported that BuzzFeed journalists who were laid off started raising money to buy their colleagues a beer. BuzzFeed News copy editor Emerson Malone wrote on Friday, "A lot of my BuzzFeed News colleagues — and friends — are losing their jobs today. Please buy them a beer." He ended up raising about $8,000 and will split it among the BuzzFeed offices around the world so that all laid off journalists can benefit.

There's no news on whether the representative gave, but Ocasio-Cortez, after standing up for quality journalism generally, did share what some of her favorite journalism outlets are. "Public radio is great!" she quote tweeted in response to a WNYC journalist thanking her for her support. "As is @ProPublica, @frontlinepbs & a great deal of other incredible outlets worth our support."

She didn't explicitly embrace giving to local PBS and NPR stations — or for paying for a newspaper subscription — but it did seem implied. Given the week that quality journalism has had, you might want to consider it.