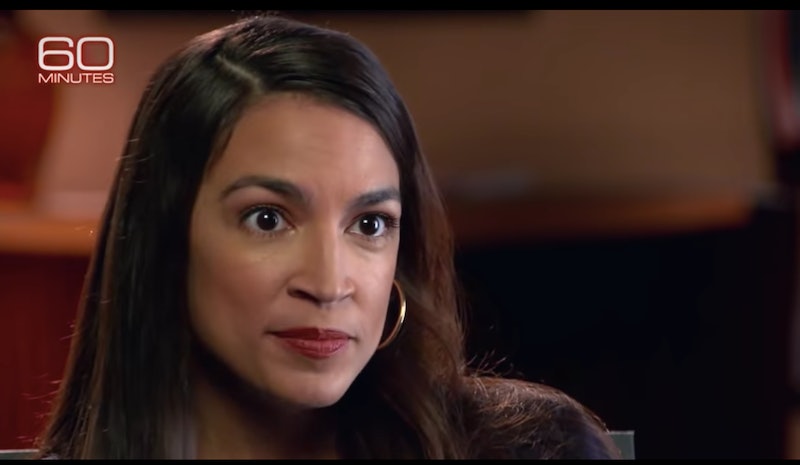 A newly-minted congresswoman is not holding back when it comes to revealing how she feels about the president of the United States. Indeed, Alexandria Ocasio-Cortez's 60 Minutes interview got real about Trump, taking him to task for his divisive rhetoric and actions.

During the interview, which aired on Sunday, correspondent Anderson Cooper asked Ocasio-Cortez whether she believes President Trump is a racist. In responding, the congresswoman did not mince words, saying to Cooper:

Yeah. Yeah no question. When you look at the words that he uses, which are historic dog whistles of white supremacy. When you look at how he reacted to the Charlottesville incident, where neo-Nazis murdered a woman, versus how he manufactures crises like immigrants seeking legal refuge on our borders, it’s — it’s night and day ...

In a statement to 60 Minutes, the White House strongly pushed back against Ocasio-Cortez's characterization of the president as a racist, the The Hill reported. In this statement, the White House's deputy press secretary asserted:

Ocasio-Cortez’s sheer ignorance on the matter can’t cover the fact that President Trump supported and passed historic criminal justice reform ... [and] ... has repeatedly condemned racism and bigotry in all forms ...

Earlier in the interview, Cooper also asked the congresswoman why she doesn't discuss Trump much. In reflecting on Cooper's question, Ocasio-Cortez indicated that she believes Trump has given a "voice" to racism. " ... I think he's a symptom of a problem," the congresswoman asserted. "The president certainly didn't invent racism. But he's certainly given a voice to it and expanded it and created a platform for those things."

In addition to sharing her thoughts about Trump, Ocasio-Cortez also reflected on how others sometimes characterize her during her discussion with Cooper. When reflecting on the congresswoman's plans for environmental and tax policies, Cooper asserted, "What you are talking about, just big picture, is a radical agenda compared to the way politics is done right now." In responding to Cooper, Ocasio-Cortez indicated that she believes that radical action is sometimes necessary to achieve significant progress. As the congresswoman put it:

Cooper then followed up by asking Ocasio-Cortez whether she would call herself a "radical." The congresswoman concurred, noting, "Yeah. You know, if that's what radical means, call me a radical."

Ocasio-Cortez was sworn in to office on Jan. 3 along with other members of the 116th congress. The congresswoman received a great deal of public attention last year after her upset victory against former Representative Joe Crowley in the Democratic primary for the New York's 14th district.

It's certainly clear that Ocasio-Cortez is continuing to make a name for herself as she begins her congressional career — and she isn't afraid to make her voice heard. Many Americans will undoubtedly be watching closely to see what actions and policies she pursues as a member of the House of Representatives.