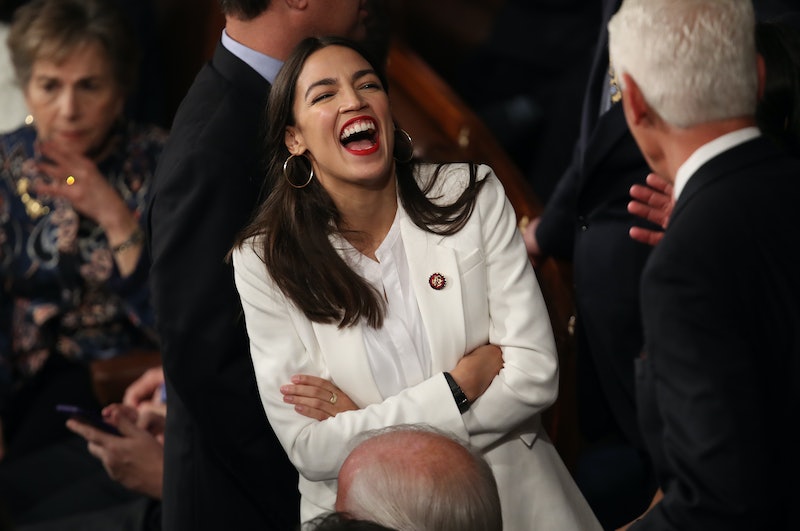 Not everyone could take a joke about football and turn it into a learning lesson, not just about the NFL, but also on taxes and racial equality. Yet, one star member of the House Dems freshman class did just that. Alexandria Ocasio-Cortez's Super Bowl tweet showed she's more worried about equality — income and otherwise — than jokes about the Patriots.

The representative was responding to a tweet by a Republican colleague, Rep. Dan Crenshaw of Texas, who questioned whether someone should "propose a 70 percent tax on the Patriots so that NFL competition is more fair and equal." The Patriots won the Super Bowl on Sunday night, marking their sixth win since 2000. Crenshaw seemed to be making a joke, ending his tweet, "Asking for a friend."

Ocasio-Cortez took the opportunity to point a few things out about her tax plan, which would raise the tax rate to 70 percent on every dollar earned above $10 million. "The average NFL salary is $2.1 million, so most players would never experience a 70% rate," she tweeted. "The owners who refuse to hire Kaepernick would, though."

With that second sentence, Ocasio-Cortez not only showed that the owners are the ones getting rich in NFL but that she also believes they're colluding against Kaepernick for his activism — as he has argued.

Kaepernick has been pushing for an arbitration hearing over his accusations of collusion, and in August his case advanced. He has been out of a job since March 2017, even though less qualified quarterbacks have been hired. He's had more luck in the world of sports gear, starring in a Nike ad campaign that received great critical acclaim and a blowback from Trump supporters.

As for the owners, the collusion is thus far just an allegation. But with regards to taxes, they would definitely have some of their income fall under the 70 percent bracket. Forbes reported that average team is worth billions and has earnings in the tens of millions, much of which the owners take home. Plus, many of the owners have other, larger streams of revenue apart from their NFL teams. Paul Allen, who died last year, is a good example; he was the cofounder of Microsoft, too.

As for the players' tax rates, there are some who would be hit by Ocasio-Cortez's tax. About 130 players make $10 million or more a year, according to Sportrac. The vast majority of players wouldn't come even close, though, to reaching that tax bracket. And the first $10 million for everybody would be taxed at the lower rates.

As Ocasio-Cortez explained on The Late Show in January, the system is progressive. "It’s not on all of your income," the representative told Stephen Colbert. "It’s on your 10 millionth and one dollar. So after you make 10 million dollars in one year, your dollars after that start to get progressively taxed at a much higher rate."

Ocasio-Cortez's response is the latest in her Twitter-heavy campaign to sell her policies, like higher tax rates and the Green New Deal, to the American people. This NFL tweet had nearly 100,000 likes just hours after it was posted Monday.