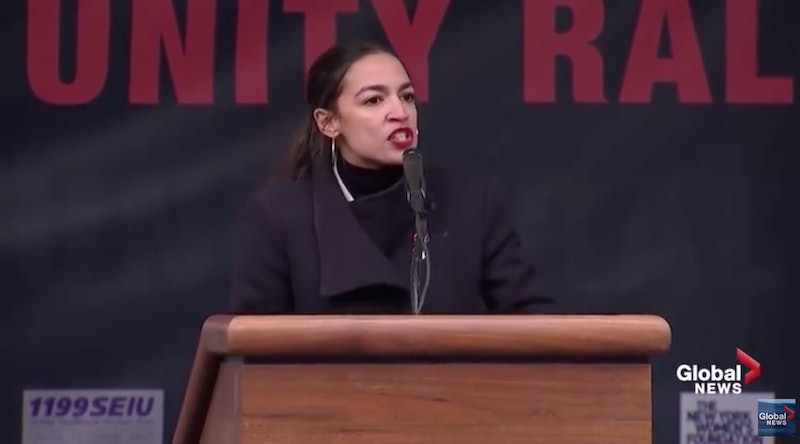 The freshman member of Congress from New York City spoke at the Women's March in the city on Saturday, laying out what she sees as the game plan for taking the movement beyond the ballot box — last year's main focus. Alexandria Ocasio-Cortez's Women's March speech spoke about turning the power of the march into policy in Washington.

"Last year we brought the power to the polls, and this year we need to make sure we translate that power into policy," Ocasio-Cortez told the crowd at the Women’s March Alliance near Central Park. "That means we will not let anyone take our rights away. In fact, we will expand them." Ocasio-Cortez also attended and spoke at the other rally, the "Women's Unity Rally" in Foley Square, and shared a similar message about "taking power to the policy."

Ocasio-Cortez went on to list a few of the policy measures that she supports passing in the new Congress, including an equal rights amendment that protects people from discrimination based on gender identity, equal pay for equal work, and parental leave for "all" parents. "This means this is the start of our advocacy because we just captured the House," Ocasio-Cortez said. "Now we have to show what we're going to do with it."

Ocasio-Cortez also addressed diversity and the importance of including different voices when making change, an issue for the national Women's March following allegations of anti-semitism, which the organizers deny.

The representative brought up Dr. Martin Luther King, Jr. Day, which is being celebrated on Monday, and said that she felt the current organizing in the country is picking up where the civil rights movement left off and incorporating more and interconnected fights for equality.

Ocasio-Cortez's Women's March speeches won't be the last before 2020; you can expect her on the campaign trail for Democrats when she's not busy focusing on bringing power to policy.