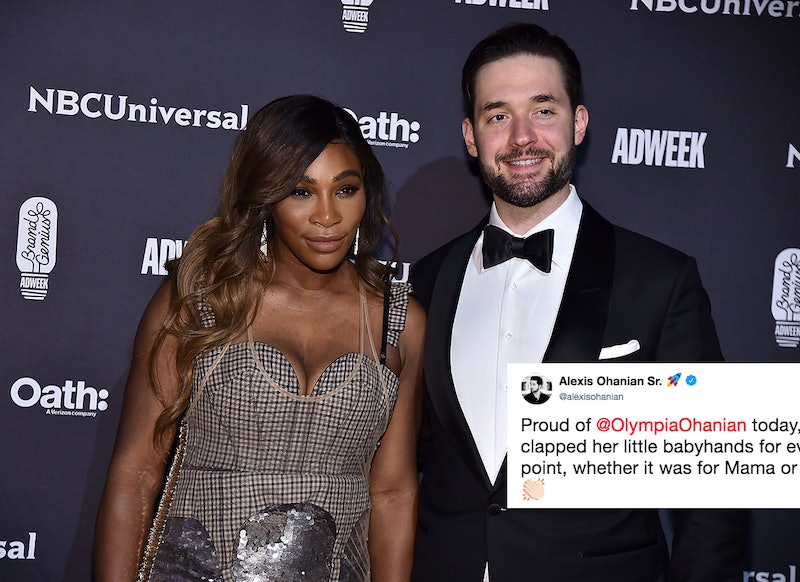 Serena Williams and Alexis Ohanian's daughter is just over a year old, but it looks like she's already learning about her mom's tennis prowess. Alexis Olympia Ohanian cheered for Serena and Venus Williams at a tennis championship on Thursday, her dad tweeted. And it sounds like it was too sweet, even though Ohanian didn't share any photos or video from the event.

The Williams sisters were competing at the Mubadala World Tennis Championship, The National explained. Venus beat Serena in a match between the sisters, but it doesn't look like there were any hard feelings. According to the outlet, Venus and Serena were "smiling and sharing comments with each other" during the match.

Little Olympia, meanwhile, was just happy to see her relatives score, even if it was against each other. Ohanian tweeted, "Proud of @OlympiaOhanian today, who clapped her little babyhands for every single point, whether it was for Mama or Auntie V."

It looks like Ohanian, the co-founder of Initialized Capital and Reddit, is just proud of his daughter for understanding the point-scoring situation. And for good reason, too — tennis can be a confusing sport to watch, and it sounds like Olympia is already becoming a fast learner.

In addition to participating in the competition on Thursday, Serena Williams also took the time to talk to reporters about a rule change that will help mothers who are professional tennis players. According to the new rules, moms who return to tennis tournaments after giving birth will be able to "use their previous ranking to enter 12 tournaments over a three-year period," the BBC explained.

Williams gave birth to Olympia in September 2017. She started competing at tennis tournaments again in March with the Indian Wells Masters, AFP noted.

Since Olympia's birth, her parents have shared plenty of photos of the little one on her own dedicated Instagram and Twitter accounts. In fact, Olympia's doll Qai Qai also has her own Instagram account, so fans can really keep up with the family's goings-on.

Olympia may be young, but it looks like she's already inheriting her mom and aunt's love of tennis. She might not know exactly what she's cheering for yet, but she's already a supportive face for her athletic family members.

As far as Olympia's future goes, though, it sounds like it's going to be her own decision. Williams told USA Today in July that "Olympia is not playing tennis, unless, of course, she wants to." It sounds like the family is just taking things one step at a time. And it doesn't look like there will be any pressure for Olympia to follow in her mom and aunt's footsteps. Whatever she decides to do, though, she'll likely keep cheering on the Williams sisters every step of the way.