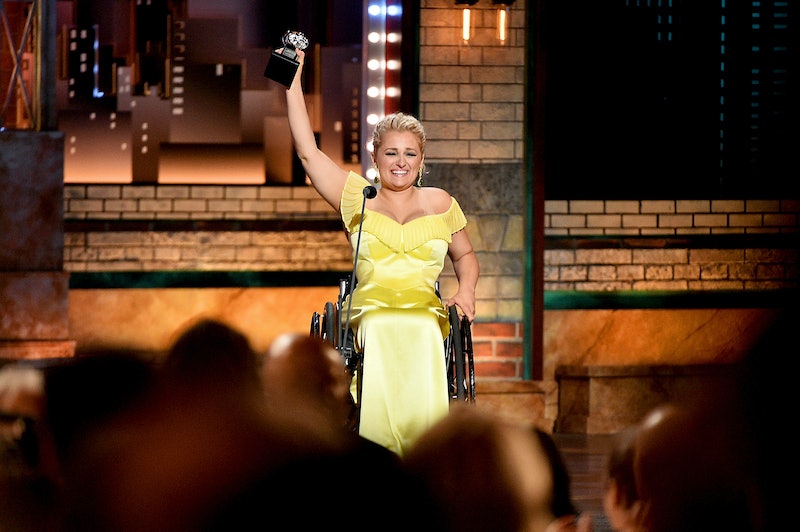 History was made at the 2019 Tony Awards on Sunday, June 9. As reported by multiple outlets, including the New York Times, Ali Stroker became the first wheelchair user to win a Tony in the award show’s history. She's also the first person who uses a wheelchair to be nominated, per the Times. Stroker was recognized for her performance as Ado Annie in the Broadway revival of Rodgers and Hammerstein’s Oklahoma!, taking home the prize for Best Featured Actress in a Musical and proving that representation of every marginalized community truly matters.

“Thank you, thank you so much. This award is for every kid who is watching tonight who has a disability, who has a limitation or a challenge, who has been waiting to see themselves represented in this arena,” the Glee alum said during her speech. “You are.”

Of course, she also took time to thank the many people that helped her achieve her Broadway dreams, including both her Oklahoma! family and her biological family and friends, who “have held my hands and pulled me around New York City for years, helping me,” as she said on stage. “Mom and dad, thank you for teaching me to use my gifts to help people. I love you, we did it,” she emotionally concluded, effectively sending everyone in the audience at Radio City Music Hall to tears.

According to The Los Angeles Times, Stroker became unable to walk when she was left paralyzed from the chest down after she went through a car accident at only 2 years old, along with her brother Jake. She learned how to use a wheelchair quickly, and the way she moved it became a defining part of her award-winning performance.

“How I move in my chair is one of the most thrilling parts for me of doing this revival,” she said to the LA Times. “All of a sudden, without needing to talk about it, we were addressing disability and sexuality. People are so unsure about how to tackle these subjects, and what I loved is that we didn’t need to talk about them. We just got to see them in action.”

This wasn’t the first time that Stroker made history in the world of theater. As reported by the outlet, she made her Broadway debut in the 2015 production of Spring Awakening, marking the first time a person using a wheelchair had performed on the Broadway stage. And as mentioned earlier, her nod made her the first actor to be nominated for a Tony award before even taking home the win.

On awards day, Stroker told The Associated Press that singing was what kept her going when she was struggling with her physical limitations, making the recognition for her performance in Oklahoma! that much more sentimental.

"I've been singing since I was 7 years old and for me singing is where I have no limitations," she said. "It is where I feel most powerful, and my voice and the ability to create music has, I think, really brought me out of all of the hardship that I've been through, and it's brought me here today into my most powerful self." As Stroker's Tony win shows, there is no limit to what someone with a disability can achieve.