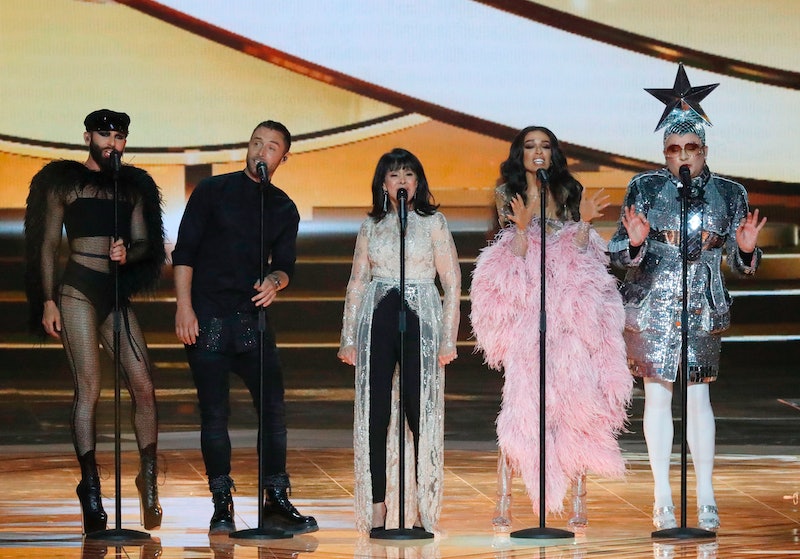 Each year all of Europe comes together for Eurovision, an international celebration of song filled with flashy costumes, catchy hooks, and some over-the-top dance performances. While the competition is off this year — due to the effects of the novel coronavirus — Netflix is here to fill the Eurovision-sized hole in your heart. Will Ferrell and Rachel McAdams star in Netflix' comedy Eurovision Song Contest: The Story of Fire Saga. Centered around the annual song contest, the film follows Icelandic duo Fire Saga as they live their lifelong dream of making it to the competition. Ferrell and McAdams actually filmed part of the movie at the 2019 competition so it's no surprise there's plenty of Eurovision contestant and winner cameos in Eurovision.

Most of the film's cameos happen during a "song-a-long" at an A-list party, thrown by lothario Russian contestant Alexander Lemtov (Dan Stevens). During a pop medley featuring Cher's "Believe", Madonna's "Ray of Light" and of course, 1974 Eurovision winner "Waterloo" by ABBA, lyrics are tossed between a who's who of Eurovision.

There's 2016 contest winner Jamala, who represented the Ukraine with her song "1944", 2012 winner Loreen, who represented Sweden with "Euphoria", and 2009's winner and repeat Eurovision participant Alexander Rybak, whose song "Fairytale" won the competition for Norway with the highest amount of points any country had received in the history of Eurovision. Most recognizable to Americans might be 2012 winner Conchita Wurst, whose performance of "Rise Like A Phoenix" made Conchita an international icon. Another artist to make a cameo in the film is John Lundvik, who may not have won 2019's Eurovision for Sweden with "Too Late For Love", but is known for composing the country's official song for the 2016 Olympic Games.

Given that Eurovision filmed on location during the 2019 competition, many of the year's participants appear in the film. Keep an eye out for Moldova's Anna Odobescu, France's Bilal Hassani, and Israel's Netta, whose song "Toy" took the 2018 Eurovision title.

Outside the "song-a-long", there's an appearance by Salvador Sobral, who won 2017's Eurovision for Portugal with "Amor Pelos Dois" and broke the longest winless run of a country (53 years) in the contest's history. And though William Lee Adams is not a singer, real Eurovision-heads will recognize him making a cameo as well. A BBC broadcaster, Adams is best known for founding and representing Wiwibloggs, the site for all news Eurovision.

While Eurovision has plenty of spoofs on K-pop and Norwegian death metal, it has enough of the real Eurovision deal to make it a star-studded sight for any fan.

More like this
Here’s Everything Coming To & Leaving Netflix In July
By Grace Wehniainen
What’s New On Netflix: The Return Of 'The Umbrella Academy'
By Arya Roshanian
The Stranger Things 4 Soundtrack Spans Classic Eras & Styles
By Brad Witter
Sadie Sink Would Escape Vecna From 'Stranger Things' With This Taylor Swift Song
By Grace Wehniainen
Get Even More From Bustle — Sign Up For The Newsletter