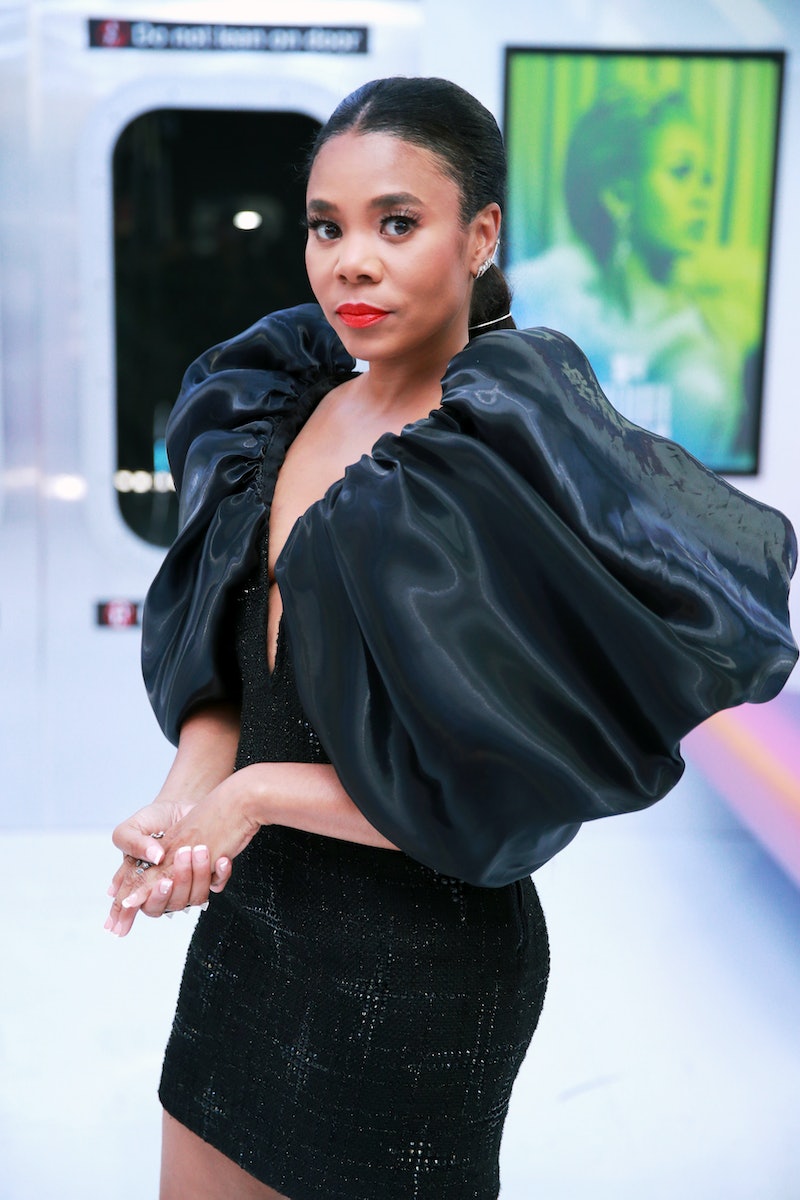 One of the biggest nights in entertainment and black excellence are officially underway, and Regina Hall's 2019 BET Awards ensembles may just end up stealing the show as this year's host. First, Hall stepped out at the pre-show — which took place in downtown Los Angeles’ at the Microsoft Theater — wearing a beautiful, structural little black dress and a glorious red lip. As for hair, the star opted to wear her locks, which were styled by Shornell McNeal for Dove Hair, using Dove products, in a slicked back bun, giving her frock the well-deserved spotlight.

For her second look of the night, Hall opened up the show by paying homage to Beyoncé's 2018 Coachella performance, wearing red and black sequin stripe pants, and a silky tank top with her long, ombre hair flowing down to her hips. Then, she came back on stage to introduce Fantasia wearing another jaw-dropping sequined look: A long, shimmery purple bodysuit with bell sleeves and a deep V-neck.

And just when I thought it couldn't get any better, the host with the most showed up in a black and neon yellow pantsuit that made my jaw drop.

But as good as her looks have been tonight, sadly, the Little star didn't take home the Best Actress prize — but that doesn't take away from the fact that she was certainly best dressed. Even as she admitted defeat while hosting, she still looked spectacular in a cream and silver floor-length gown. However, Hall did admit that while she's no stranger as a BET Awards attendee, she was a little nervous to host.

"I’ve watched the BET Awards since its inception so I’m honored to be able to host it," she told Variety in May. "It’s scary though! It’s a big audience. You want to have a show that’s entertaining for the live audience and the people watching it."

While the actress is a pro in front of the camera, she apparently didn't get over her nerves until right before she hit the historic stage. When asked how she deals with butterflies, she responded in the same interview by saying: "Gosh, you just do it. There’s something about just doing something that makes you move past it. That’s what keeps you thinking, practicing and figuring it out — the nerves are what make you prepared with everything."

But bringing it back to fashion, at last year's show, Hall wore a stunning strapless canary yellow tiered gown, with embellished with tassels on the skirt. She wore her hair in a half-up-half-down 'do, and paired her entire look with a pink lip, bold, smokey eyes, and rosy cheeks. As for shoes, the actress opted for a shimmery pair of sleek, silver, strappy pumps.

Audiences will certainly be seeing a lot of Hall tonight, but for those who are eagerly waiting for Girls Trip 2, the actress' co-star Queen Latifah recently revealed that the cast is ready to get things moving. “We’re just waiting for a script to be honest," Latifah told PEOPLE in early May. "Tiffany called me like two weeks ago like, ‘I know me, and you and Jada and Regina get in the room, we can write this script. She’s talking like she doesn’t have a job. But we really want to make it happen as soon as possible.”

But in terms of tonight's clothes, there's no question that Hall completely knocked our socks off with her looks throughout the night, which comes as no surprise. After all, she's been a style icon for decades.