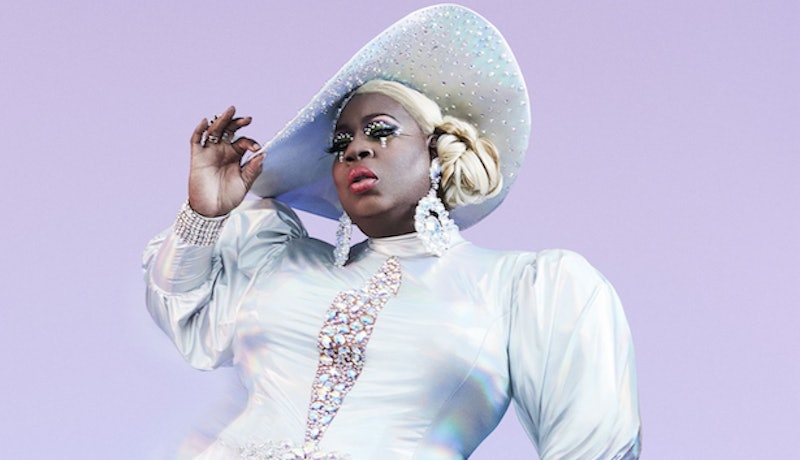 If you've been a Drag Race fan for some time, you know the name Latrice Royale. She's one of the show's most beloved and respected queens, and because she already made a comeback in All Stars Season 1, she almost didn't agree to return for a third time. But return she did, and looking back, Latrice Royale would've played All Stars Season 4 with a totally different approach.

In the season premiere, all of the queens sashayed into the werkroom to reveal themselves to their competitors. And just when they thought everyone had arrived, Latrice made a shocking entrance with her longtime teammate Manila Luzon. But while her fellow contestants may have been shaking in their boots, Latrice wasn't worried. She was so lax, in fact, that she forgot to actually play the game. And that was her biggest mistake.

"For the first couple weeks, I was in a daze and kind of forgot that I was in a competition," she tells Bustle over the phone. "I was helping these girls out. I was giving them suggestions and helping them beat me. I kind of left myself on the back burner a little bit. And all you need to do is fade in the background just enough for them to kick you out."

The All Stars elimination process is tricky in that it allows each episode's challenge winner to choose who's sent home. The top two queens lip-sync for that power, but beyond that, there are no rules —which means if the victor wants to save her friend, she has every right to do so.

To make things even more gag-worthy, each of the top two queens this week found their best friend in the bottom. Manila was determined to save Latrice, while Monique wanted to keep her Season 10 sister, Monét X Change. Ultimately, Monique won the lip-sync and sent Latrice home, which wasn't a surprise for the newly eliminated queen.

""Chiiiiiild, please. There was no doubt," she says. "When I was talking at [Monique], and I say talking at her because I couldn’t talk to her, because she was so distracted putting on her makeup and doing whatever, she wasn’t listening. So I just felt like everything that was coming out of her mouth was disingenuous because she couldn’t even take the time to give me her undivided attention."

Monique, on the other hand, said on the show that it was a difficult decision for her to make, considering Latrice's legendary reputation, and most of the other queens agreed that it was a hard call.

"I was a little taken aback by hearing how much my peers look up to me and respect me and see me as a legend," Latrice says. "And they’re trying to get to my status." That certainly justifies her feeling of obligation to help the other girls, but unfortunately, her generosity came back to bite her.

However, Latrice says that's OK because she's "busy busy busy" and will have no problem moving on from her loss. "Part of the game is that there are no rules around it. Everybody’s making up their own rules and doing whatever," she says. "So I can't be mad at that. I cannot be mad at it. I can't be surprised, I chalk it up to be what it is. It's not the end of the world. I got other things to do anyway. You know what I mean?"

Not to mention, at this rate, she could be returning to Ru's mainstage at any point in the near future. And because she is the legend that she is, she would be welcome at any time, guaranteed.