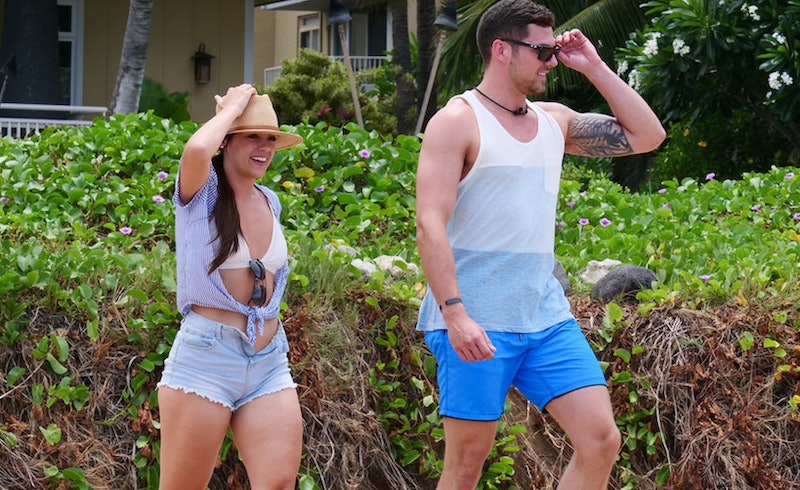 Ashley H. may have started her Temptation Island journey fully committed to Casey, but as the season has worn on — and especially after he said he would be completely fine if they broke up — she's begun to explore her other options. So far, she's gone on dates with both Deac and Ben, but if she doesn't leave the show with Casey, it seems most likely that Ashley will end up with Ben. Not only do they seem to have a stronger connection than her and Deac, but they interact pretty regularly on social media — and their comments are often flirty.

For example, when Ben tweeted on Oct. 8 asking if anyone wanted to be his date so they "could go do cute Fall things like eat leaves," Ashley responded affirmatively — as long as they were "leafy greens." That could just be a friendly joke, but it at least shows they're still on good terms.

There's also the fact that in a sneak peek clip of their date in the Nov. 14 episode, Ben kisses Ashley...and she doesn't pull away. "I feel like Casey and I are having issues right now," she says. "But I definitely could see myself with Ben." And certainly, their social media interactions are pointing in that direction.

On Oct. 23, Ashley posted an Instagram picture from the show of her and Ben hugging and laughing, and fellow reality TV queen Snooki took note.

"If you don't end up with Ben, I'm leaving," the Jersey Shore star commented. Normally, contestants don't respond to such speculative comments, but Ashley did. "Time will tell gf," she wrote with the smirking emoji. Suggestive, no?

Ashley's also not shy about interacting directly with Ben on social media. She comments on most of his Instagram photos, and has replied to a few of his recent tweets.

The Instagram comments are semi-flirtatious. In one picture, he's wearing really short shorts, which he captioned, "You can call me your fairy Quad-father," and Ashley commented, "tree trunks."

He posted another photo of himself after mudding in Arizona. He wore a dirty t-shirt, another pair of small shorts, and a fanny pack. "It's called fashion Deborah," he captioned the photo. Ashley commented, "Who wears short shorts," with a smiling purple devil. Ben replied, "Show em if you got em."

The most flirtatious comment by far was posted under a picture of Ben at his nephew's birthday party in which the two wore semi-matching shark costumes. "OMG THIS IS SO CUTEEEEE," Ashley wrote with heart eyes.

On Nov. 7, Ben tweeted about his past Tinder habits. "Back in the day, I used to swipe left on pretty girls to keep them humble," he wrote. Ashley was the first to respond. "I don't know if you know this or not, but people [don't] know if you swipe left LMAO."

She also tweeted directly at Ben and Deac just after Temptation Island's Nov. 7. "'@Benjaminrileyk "I hope Ashely sees through @DeacConti bullsh*t,'" she quoted. "Jeeeze Ben you were playing the game."

The question remaining is: did he win?

More like this
All The Clues About Aly & Zach’s Relationship Status After 'The Bachelor'
By Brad Witter
Mack & Domynique Reportedly Had An "Epic" Breakup On 'Married At First Sight'
By Brad Witter
All The Clues Clint & Gina Aren’t Still Together After 'MAFS' Season 16
By Brad Witter
Joey Essex Is Rumoured To Be Dating A 'Love Island' Favourite
By Sam Ramsden
Get Even More From Bustle — Sign Up For The Newsletter
From hair trends to relationship advice, our daily newsletter has everything you need to sound like a person who’s on TikTok, even if you aren’t.