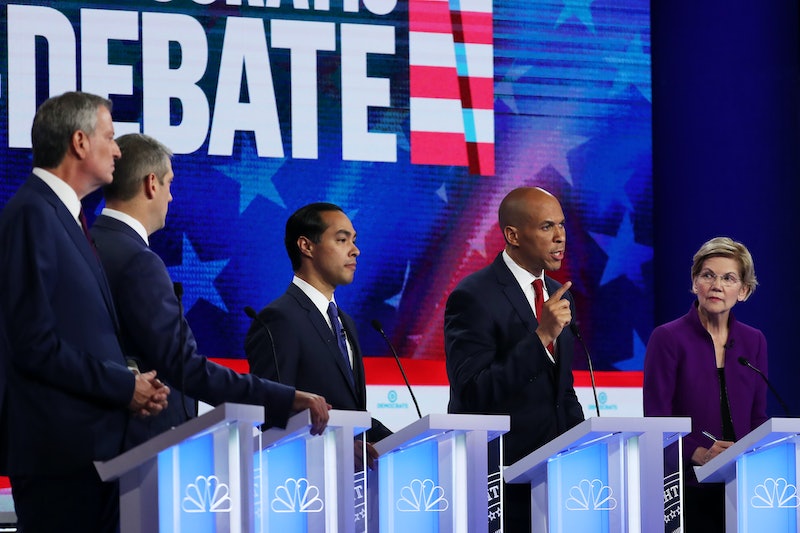 The first round of the Democratic debate has officially come to an end. On Wednesday night, 10 presidential candidates from the Democratic Party gathered in Miami, Florida, to debate each other on immigration, labor, reproductive health care, gun control, and much more. At the end of the debate, each presidential hopeful had 45 seconds to deliver their last remarks. All the Democratic debate closing statements were arguably the 2020 candidates' biggest shot yet to make a lasting impression on the American people.

For the first round of the debate, 2020 presidential hopefuls Bill de Blasio, Tim Ryan, Julián Castro, Cory Booker, Elizabeth Warren, Beto O'Rourke, Amy Klobuchar, Tulsi Gabbard, Jay Inslee, and John Delaney had 60 seconds to answer questions from hosts Chuck Todd, Lester Holt, Rachel Maddow, Savannah Guthrie, and Jose Diaz-Balart. But the last segment of the debate was their one opportunity to talk freely about why they deserve your vote.

Each vowed to transform the United States for better in their last remarks of the evening. The debate went on for two hours that seemed to fly by. According to a transcript from NBC News, the first round of the debate was divided up into five segments with four commercial breaks.